Kevin Bacon Birthday Special: 7 Roles Of The Talented Actor Every Movie Buff Should Know About 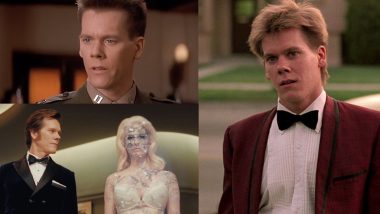 Every time we hear Kevin Bacon's name, Hollow Man pops up in our memory. An arrogant but brilliant scientist turns into a psychopath in this film. So you can imagine we didn't think too highly of him. In our defense, we were quite young to understand it was just a character but not the man himself. Fortunately for us, we came across more movies of him which instilled in us the faith eventually that with Bacon in a movie, it's got to be something special. Be it Apollo 13, or A Few Good Men or Footloose, this talented actor has done some incredible roles which helped us put our 'Hollow' judgments behind. Kevin Bacon Wants to Play Joe Exotic in a Tiger King Movie

What's amusing is that there's a parlour game called Six Degrees Of Bacon. It signifies that you can trace a connection between any arbitrary actor and Bacon in just six steps. Interesting, isn't it? So on his 62nd birthday, let us tell you about 7 roles of the actor you must know about.

Bacon played Henry Young, a man who was kept in solitary confinement for many years which left him unhinged. The actor lost 25 pounds and put on makeup that showed signs of what the character goes through in that confinement. But it was those eyes that saw the whole world with suspicion after the ordeal which stays with you.

This was considered Bacon's breakthrough role where Ken moves to a conservative town from California. This town has forbidden dance and music but Ken wouldn't have any of it. You can actually see the effort he must have put in the many dance sequences in the film which are tactfully mounted. But it has to be his Bible references for his arguments which made us like it more.

JFK doesn't really belong to Kevin Bacon but his male prostitute turn who is also an informer works splendidly. He keeps it flamboyant and cocky which bares the fact that Bacon has a lot of aces up his sleeves.

Kevin Bacon plays a prosecutor who is quite intense and comes across strongly in this legal drama. It was a limited role, to be honest, but he managed to blend in pretty well with a starry cast consisting of Tom Cruise, Demi Moore and others.

Kevin's character Jack Swigert was a last-minute substitute to the mission which becomes a source of lot of incidents on the fateful vessel. You can understand what he could be going through with the way his mates treat him - someone, who just got lucky!

Bacon plays the level-headed detective among a group of three friends. The investigation is on his other two mates. He forms the perfect cushion for an ex-con and a man with a child abuse history. Like his character, Bacon keeps it together in the movie. Dark Phoenix: From 2000 to 2019, Ranking All the Main X-Men Movies From the Worst to the Best (SPOILERS AHEAD)

Bacon is Sebastian Shaw, the handsome mutant villain who can use kinetic energy to his fancy. He is just so deliciously cruel in the film that you would love him. Bad boys do have their appeal you see!

(The above story first appeared on LatestLY on Jul 08, 2020 09:40 AM IST. For more news and updates on politics, world, sports, entertainment and lifestyle, log on to our website latestly.com).