We are already crying seeing the love that these two share for each other but we have to tell what Nick had to say about the album. In a conversation with Apple Music, Nick revealed that it is very important for him to make Priyanka feel happy. 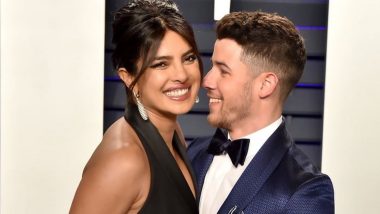 Nick Jonas and Priyanka Chopra are one of the most adorable couples that we know of. Ever since they started dating, the two have been giving us several couple goals and their marriage was no less than a dream. The two never fail to show how much they love each other and we often see them cheer each other on social media and promote each other's work. The singer has now unveiled his new album titled Spaceman for his fans to enjoy and has revealed that the songs in the album are simply love letters for his wifey. Nick Jonas Posts A Spectacular Throwback Pic Of His Ladylove Priyanka Chopra Jonas At A Beach!

We are already crying seeing the love that these two share for each other but we have to tell what Nick had to say about the album. In a conversation with Apple Music, Nick revealed, “Most of the songs are pretty much just love letters, which, when I can't articulate the way I feel with my words with no music, I go to the studio. And I'm grateful to have that because it makes her happy, and that's most important.”

He went on to talk about how the idea of the album came into his mind and revealed, "So Spaceman came into my mind because I was thinking, 'What's the one thing that all of us have felt during this time?' It's just completely disconnected from the world. We've gotten so accustomed to looking at a screen instead of human interaction, and I think the thing that keeps us all encouraged and hopeful is just the idea of knowing that there will be a tomorrow when this isn't our reality, and I think the body of work as a whole tracks that." Priyanka Chopra and Nick Jonas' Christmas 2020 Wish From Their Family To Ours, Will Warm Your Hearts.

As for Priyanka, she is over the moon as her novel Unfinished has become the Best Selling Book in New York, India and Canada. Workwise, she was last seen in Netflix's The White Tiger. The film also starred Rajkummar Rao and Adarsh Gourav in pivotal roles. The film won many accolades and praises from across the globe. Priyanka also recently wrapped up shooting for her next project, Citadel, in London.

(The above story first appeared on LatestLY on Feb 26, 2021 08:19 PM IST. For more news and updates on politics, world, sports, entertainment and lifestyle, log on to our website latestly.com).