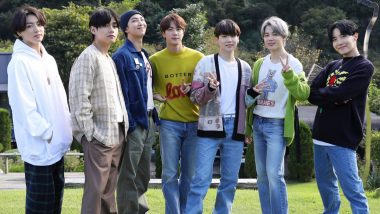 The awards were dominated by the Grammy-nominated BTS. The bagged three awards while Iron Man aka Robert Downey Jr. won the award for Favourite Movie Actor. Millie Bobby Brown, Ariana Grande, Justin Beiber also won major awards. While BTS received its award virtually, we saw Downey have a fun time at the ceremony. The actor even posted a picture covered in green slime and thanked everyone for their support. Referring to himself as Hulk, he celebrated his win with this happy post. Kids Choice Award 2021: Robert Downey Jr. Turns Into Hulk at the Award Show.

Many shows, films and artist were honoured with awards under different categories. Check out the full list of winners below:

FAVORITE VOICE FROM AN ANIMATED MOVIE

Generation Change recognised James for his philanthropic work with the 'I Promise School' public elementary in Akron, Ohio, which is supported by the LeBron James Family Foundation.

(The above story first appeared on LatestLY on Mar 14, 2021 12:52 PM IST. For more news and updates on politics, world, sports, entertainment and lifestyle, log on to our website latestly.com).