The filming for season six began recently after being delayed for a little less than a year by the pandemic. Producer Caryn Mandabach revealed that the final season is going to be the best season so far. 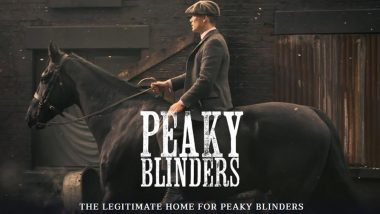 Fans were heartbroken to learn that the popular crime drama series Peaky Blinders will be coming to an end soon with the sixth season being its last season. Creator and writer Steven Knight had issued a statement earlier and confirmed the news. The fans were quite shattered to know that this would be the last time they will see Cillian Murphy’s journey as Tommy Shelby. And while they were digesting the news, Steven had a little surprise for them. He revealed how a movie was in works after season six ends. Peaky Blinders Season 6: UK Government Approves Filming of Cillian Murphy’s BBC Show Under Social Distancing Guidelines.

In a recent interview with Deadline, Steven revealed that they will be making a movie as a follow up for the sixth season. He added that his plan from the start was to end Peaky Blinders with a movie and said, "This is what is going to happen." He revealed that they had to make many changes to the show because of COVID. It is being reported that he previously had expressed his desire to wrap up the drama television series with a seventh season, but the pandemic put a stop to that idea and that's how the movie happened.

The filming for season six began recently after being delayed for a little less than a year by the pandemic. Producer Caryn Mandabach revealed that the final season is going to be the best season so far. Caryn added, "Steve's uncanny ability to be prescient about world events is only matched by his ability to make Tommy Shelby the most indelible character of our times.” Peaky Blinders: Cillian Murphy’s Journey As Tommy Shelby To Conclude With Season Six.

Earlier, addressing the audience and talking about the last season of the show, Steven had said in the statement, “After the enforced production delay due to the COVID pandemic, we find the family in extreme jeopardy and the stakes have never been higher. We believe this will be the best series of all and are sure that our amazing fans will love it. While the TV series will be coming to an end, the story will continue in another form.” The sixth season will see Anthony Byrne return as a director. The show will be produced by Nick Goding.

(The above story first appeared on LatestLY on Jan 20, 2021 03:04 PM IST. For more news and updates on politics, world, sports, entertainment and lifestyle, log on to our website latestly.com).