Ryan Gosling to be a Part of Thor: Love and Thunder? Fans Speculate About His Character After Spotting Him With Director Taika Waititi

Actor Ryan Gosling was recently spotted along with Thor 4 director Taika Waitititi and now fans can't keep calm thinking if he is all set to join the Marvel universe soon. As soon as pictures of Gosling and Waittiti hit the internet, fans have been speculating about him joining Thor 4. Read more deets inside. 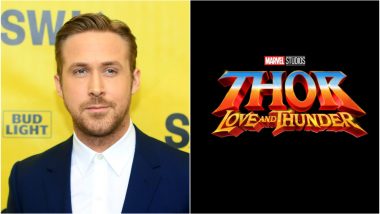 Is Ryan Gosling a part of Thor 4? (Photo Credits: Twitter)

Ever since Marvel announced Thor: Love and Thunder to be directed by Taika Waititi at the San Diego Comic-Con, fans have been super excited about the project and are begging to know more about it. While it was amazing to see Natalie Portman returning to the franchise as female Thor wielding the Mjolnir at the announcement event, we hardly have any news about the rest of the cast. Social media went into a tizzy though on August 17 as they saw pictures of Thor director Taika Waititi hanging out with Ryan Gosling recently. Fans React to Natalie Portman Playing Female Thor in Thor: Love and Thunder and Not Everyone Is on Board with It.

As soon as pictures of the duo together hit online, fans were quick to ask if Gosling will now be joining the Marvel universe and if yes, is he a part of Thor 4? Marvel has been adding some new members with recent films and after the recent superhero stint of Jake Gyllenhaal as Mysterio in Spider-Man: Far From Home, we can't wait to find out if Gosling will be superhero-suiting up soon!

The La La Land actor has a huge fan following and has done everything from comedy to romance and even his recent space film, First Man. He has been an Academy Award nominee and it certainly will be amazing to see Chirs Hemsworth and him together in a film, just cause it will be a treat to everyone's eyes watching the two fine men work together. Well, let's wait and watch if Gosling turns out to be the new MCU member!

(The above story first appeared on LatestLY on Aug 17, 2019 04:22 PM IST. For more news and updates on politics, world, sports, entertainment and lifestyle, log on to our website latestly.com).