Shazam: Fury of The Gods Recent Set Leaks Give Us a New Look of Zachary Levi's Battle-Damaged Suit!

Shazam! Fury of the Gods is having its production go seamlessly as this Zachary Levi starrer aims for a 2023 release. While the plot of the film has been very secretive with not many details aside from a few casting reveals, the set photos on the other hand have just been pouring in. 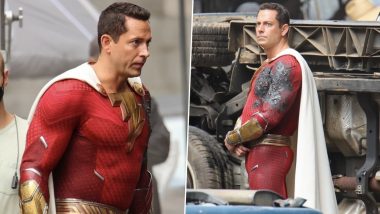 Shazam! Fury of the Gods is having its production go seamlessly with this Zachary Levi-starrer aims for a 2023 release. While the plot of the film has been very secretive with not many details aside from a few casting reveals, the set photos on the other hand have just been pouring in. Before we could even get an official look at the new costume, we got to see it in action when set photos of the movie started leaking. Shazam! Fury of the Gods: 5 Things We Would Like To See in Zachary Levi’s Next DC Outing.

It looks like the makers took the criticism about the costumes from the first Shazam! to heart as they have received a major overhaul. The suit this time around maintains the core look of Shazam while having a new aesthetic to it. Its less muscle padded this time around, and it has a darker shade of red over it. Levi stands out more this time around as his physique doesn’t look fake, but rather natural. With how padded the last costume was, the suit just stuck out as a sore spot in a rather really fun film. But it looks like things have taken a turn for better this time around. Shazam! Fury of the Gods: David F Sandberg Reveals First Look of the Superhero Costumes Before They Get ‘Leaked’!

Check Shazam Fury of the Gods Sets Leaked Pics Below

These set photos show us that maybe Shazam might get badly injured in some way which might result in the suit getting badly damaged. It’s great to see that the filmmakers and the costume department are paying closer attention to the suits. The photos can even hint at a huge action scene which might end up causing the suit to look like this. Whatever the case may be, it does look like Shazam! Fury of the Gods is shaping up to be really something special. Directed by David F Sandberg, Shazam! Fury of the Gods is scheduled to release on June 2, 2023.

(The above story first appeared on LatestLY on Jul 08, 2021 04:57 PM IST. For more news and updates on politics, world, sports, entertainment and lifestyle, log on to our website latestly.com).