At first glance, the suit resembles the Iron Spider suit. It has streaks of gold to it while maintaining the big logo from that suit. The second leak comes from Funko pops and some toy leaks that just happened moments ago. Read the full story. 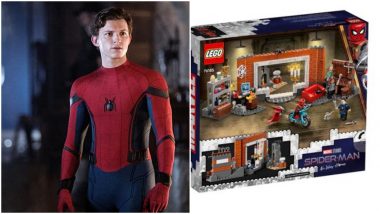 Spider-Man: No Way Home is just six months off its release and we are getting only more and more interesting rumours by the day.  But while you wait for an official trailer, recent merchandise leaks have happened that could show us the two new suits that will be worn by our favorite wall-crawler in Spider-Man: No Way Home. Tom Holland's Peter Parker throughout his run in the Marvel Cinematic Universe (MCU) has had over four suits. Last seen in Spider-Man: Far From Home, he had ditched the classic red and blue colour pattern in the favour of red and black. It was a great rendition of the iconic suit and one that was welcomed by fans. Spider-Man - No Way Home: Plot of Tom Holland's Marvel Film Leaked? An Old Reddit Thread Claiming So in Going Viral!

Speaking of the 'leaks', the first came from Lego who accidentally leaked one of the sets which showcased a showdown that will happen at the Sanctum. The set comes with Doctor Strange, Wong, and MJ who will join Spidey against a monster with tendrils. The set gives us a good hint of what we can expect from Spider-Man No Way Home for it shows us that Doctor Strange and Wong will be joining the fight with Peter. You can check out the Lego set down below.

You can even get a better look at the suit over here because the interesting fact behind it is that it originates from the Spider-Man Far From Home concept art book. Spider-Man: No Way Home! Tom Holland Reveals Title and Release Date of His Marvel Movie Through a Quirky Video.

At first glance, the suit resembles the Iron Spider suit. It has streaks of gold to it while maintaining the big logo from that suit. The second leak comes from Funko pops and some toy leaks that just happened moments ago. It gives us a clear look at the second suit that will be introduced. It’s a black suit with gold webbing on it, the description just describes it as the gold and black suit. You can check out the Funko pops below over here.

A look at Spider-Man No Way Home Pops!

The toy leaks also give us a much better look at the suits and the characters that will be appearing in Spider-Man No Way Home. We get our first look at Doctor Strange and J Jonah Jameson for it looks like they will be having a major role in this film. You can check out the action figures out here below.

THIS IS NOT A DRILL!! Official look at #SpiderManNoWayHome pops & merchandise released by Marvel!! DOCTOR STRANGE SPIDEY??? pic.twitter.com/oUbzLyuxGn

(The above story first appeared on LatestLY on Jul 02, 2021 06:56 PM IST. For more news and updates on politics, world, sports, entertainment and lifestyle, log on to our website latestly.com).