With Spider-Man: No Way Home scheduled to come out in December, we have just got a title reveal for the movie along with some BTS photos and officially released photos. 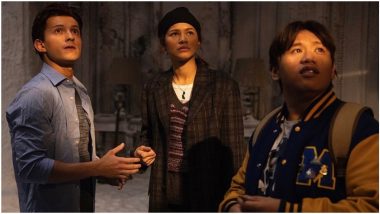 Out of all the Marvel releases this year, Spider-Man: No Way Home is undoubtedly the most anticipated film. With Spider-Man: Far From Home ending on a cliffhanger, fans have been waiting to see what's next for our favorite wall crawler. With Spider-Man: No Way Home scheduled to come out in December, we have just got a title reveal for the movie along with some BTS photos and officially released photos. Other than the plot of the film has been kept tight sealed and we don’t know anything else about it aside from the fact that the lead cast from the previous films will be returning along with some old familiar faces being leaked. Tom Holland Calls MCU’s Spider-Man 3 the ‘Most Ambitious Standalone Superhero Film of All Time’ and We Are Now Both Scared and Excited!

Talking about old familiar faces, it was originally reported by The Hollywood Reporter (THR) that Jamie Foxx and Alfred Molina will be reprising their roles as Electro and Doctor Octavius respectively.

Just two months back on Reddit, a user by the name of u/SpideyForever245, who claimed to work on the film left a detailed comment on the subreddit of r/MarvelStudiosSpoilers and mentioned what the plot of the film is going to be like. That post is going viral again. Spider-Man No Way Home: 5 Interesting Fan Theories Going Viral About Tom Holland's Superhero Film.

We mention down all the key plot points of what was mentioned in the comment.

-Starts off from where Far From Home ended and there is a time skip.

-Peter is trying to prove his innocence.

-Doctor Strange is handling the multiverse as it's breaking down and capturing villains from other worlds and putting them in a prison he made.

-The villains escape due to Peter messing with some magic as he tries to clear his name.

-Tobey Maguire and Andrew Garfield as Spider-Man are in the second and third act of the film.

-The climactic battle takes place on the Statue of Liberty which now looks like a big Captain America with a shield.

-The villains are all from the previous Spider-Man films being led by Willem Dafoe’s Green Goblin.

-They are fighting over some kind of Stark arc reactor.

-Goblin kills someone in the end, not sure who, but it sends Tom’s Peter into a fit of rage and results in him almost killing Green Goblin.

-Everyone still knows that Peter is Spider-Man in the end.

Now you may be wondering as to why we should believe a random person off Reddit, but this same user leaked the cameo of Julia Louis-Dreyfus in Falcon and The Winter Soldier along with even correctly predicting when the trailer for Eternals would drop. While we should all take this leak with a grain of salt, it still does sound a bit plausible enough.

(The above story first appeared on LatestLY on Jun 26, 2021 10:51 AM IST. For more news and updates on politics, world, sports, entertainment and lifestyle, log on to our website latestly.com).