Sweet Tooth Review: Netflix’s New Tale About a Dystopian World Will Fill You with Hope and Optimism, Say Critics

Sweet Tooth comes out tomorrow on Netflix and is based on the DC comic book of the same name. It takes place in a dystopian world, where a hybrid-deer boy named Gus befriends a wandering loner named Jeppard, as they travel around what’s left of America in search of Gus’ origins and Jeppard’s past. 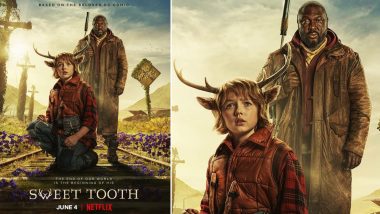 Sweet Tooth comes out tomorrow on Netflix and is based on the DC comic book of the same name. It takes place in a dystopian world, where a hybrid-deer boy named Gus befriends a wandering loner named Jeppard, as they travel around what’s left of America in search of Gus’ origins and Jeppard’s past. So what do the critics think about Netflix’s latest outing? Sweet Tooth: From Doom Patrol to iZombie, 5 Obscure DC Properties That Got Screen Adaptations Before This Netflix Series.

The early reviews are out and critics are lauding it with unanimous praise with many calling it a really sweet journey from start to finish. Let’s check out some of the reviews below.

Rolling Stone: "At first glance, Sweet Tooth seems like an odd title for a post-apocalyptic drama, particularly one about an apocalypse caused by a virus, which has the unfortunate timing to arrive while we are still digging our way out from under Covid. But once we get to know its adorable young hero Gus, “sweet” turns out to be the most accurate possible adjective to describe the show."

The Hollywood Reporter:  "Some predisposition toward the saccharine is necessary to properly consume Netflix’s new fantasy Sweet Tooth. I mean, it’s right there in the title — but there’s great pleasure in reporting that for most of Jim Mickle’s adaptation of Jeff Lemire’s Vertigo comic, a precarious balance is handled with real deftness. Emotionally and geographically, this is a show with real epic scope, and it earns the laughter and occasional tears that it wrings from the audience thanks to a real and unquestionable, well, sweetness."

RogerEbert.com: "With source material written before the pandemic and a production that began life pre-COVID as well, Netflix’s brilliant “Sweet Tooth” may not be a direct commentary on what the world has been through in the last year, but the presence of that real-world echo is undeniable. It’s a show about a devastating virus that leads people to distrust one another, go into hiding, allow their fear to drive their decisions, and ultimately form unexpected bonds. It’s about isolation and grief, but it is also very much about the unpredictable connections that can end up defining us. It’s intense, riveting storytelling that recalls the spirit of Amblin almost more than the nostalgia warehouse that is “Stranger Things,” the king of Netflix Originals. It would have been excellent television in any year, but "Sweet Tooth" strikes a different chord in 2021 than anyone could have expected."

Digital Spy: "Someone who was born in the same year that Sweet Tooth was first published has no right to be this good, let alone when you take into account the show's mature themes and all those distracting (yet wholly convincing) prosthetics. Everyone else impresses on this show too, including Game of Thrones alum Nonso Anozie in the role of Jepperd. But still, it's Christian who steals every scene he's in with a wide-eyed wonder that somehow also belies a maturity beyond his years."  OTT Releases of The Week: Manoj Bajpayee’s The Family Man Season 2 on Amazon Prime Video, Christian Convery’s Sweet Tooth on Netflix, Patrick Wilson’s The Conjuring 3 on HBO Max and More.

Joblo.com:  "Pandemic-themed stories have grown in popularity since COVID-19 changed our world in 2020. Some of these films and TV series have been good while others were incredibly tone-deaf. It seems the more the story tries to capture reality, the less enjoyable it has been for the rest of us. Sweet Tooth is an interesting addition to this wave of entertainment as it is an eerie take on a worldwide plague but one with a layer of hopefulness that makes it a rousing adventure rather than a depressing one. Sweet Tooth also works because it changes the bleak tone of Jeff Lemire's acclaimed comic book and turns it into a show that everyone can enjoy. The result is a blend of The Walking Dead and Twelve Monkeys but through a Tim Burton-esque lens and quite possibly the show everyone will be talking about this summer."

(The above story first appeared on LatestLY on Jun 03, 2021 04:36 PM IST. For more news and updates on politics, world, sports, entertainment and lifestyle, log on to our website latestly.com).