The Babysitter: Kille Queen is the sequel to the unlikely hit horror-comedy from Netflix that came out in 2017. The first few reviews of the film are out. Most critics have slammed the film. Here's what everyone is saying. 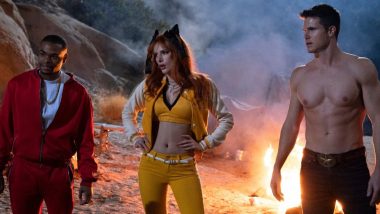 The Babysitter: Kille Queen is the sequel to the unlikely hit horror-comedy from Netflix that came out in 2017. Most of the main cast - Judah Lewis, Hana Mae Lee, Robbie Amell and Bella Thorne - reprise their roles in the new film. But, it seems like the storylines are also reprised. Because, that's what the majority of the critics are saying about the film. The first few reviews of the film are out. Most have slammed the film. Here's what the critics are saying. The Babysitter: Killer Queen Trailer - Bella Thorne Returns as the Demonic Cult Member for This Horror Comedy (Watch Video).

The movie managed to impress cbr.com. The publication wrote in its review, " The Babysitter: Killer Queen is even more fun than its predecessor, largely because it takes bigger, more self-aware chances and manages to stick the landing more often than not. This is a movie that knows exactly what it is and embraces it with gruesome glee, resulting in another bloody rollercoaster ride that rises above conventional genre constraints for a cinematic cocktail that is sure to thrill fans of '80s cinema"

Impressed by it, Heaven of Horror called the sequel sillier. "As a horror fan, you will catch a lot more of the pop culture references than anyone else. That’s a special treat for genre fans for sure," they wrote.

Tecchquila.com called the movie a disappointment. "The Babysitter: Killer Queen tries to live off of the well-deserved popularity of the first movie that does not work in its favour. There’s nothing genuine or fun about it, and it thus drags a lot, even at 102 minutes. And the dialogues are probably the worst part of this sequel. All-in-all, quite the disappointment," the publication said.

TV Guide also panned the movie, "Gory horror-comedies with half-baked plots can actually be quite entertaining if they are at least well-shot and well-written. This sequel to the borderline-decent 2017 Netflix original The Babysitter is neither of these things."

(The above story first appeared on LatestLY on Sep 10, 2020 05:49 PM IST. For more news and updates on politics, world, sports, entertainment and lifestyle, log on to our website latestly.com).