The Devil All The Time Ending Explained: How Tom Holland, Robert Pattinson's Grim Netflix Drama Ends And What Does It Means (SPOILER ALERT) 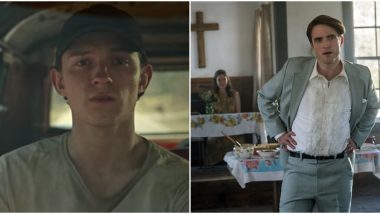 The Devil All The Time Ending Explained

The Devil All The Time attracted eyeballs thanks to its interesting ensemble cast, some of them with huge fan following, doing characters that range from dark to terribly dark. Directed by Antonio Campos, The Devil All The Time stars Tom Holland, Bill Skarsgård, Riley Keough, Jason Clarke, Sebastian Stan, Haley Bennett, Eliza Scanlen, Mia Wasikowska, and Robert Pattinson. It is based on author Donald Ray Pollock's novel by the same name. Jake Gyllenhaal serves as the producer. The Devil All The Time Movie Review: Tom Holland, Robert Pattinson Embrace the Darkness in This Disturbing Netflix Drama That’s Not for the Faint-Hearted!

The Devil All The Time is set in two sleepy towns of Meade and Knockemstiff in Ohio, between the end of World War II and the beginning of Vietnam War. Dark and disturbing, the movie deals with psyche of people damaged by war and blind belief in religion. Most of the characters are pretty unlikeable, though Holland's disturbed soul Arvin is the best we have for a hero. Otherwise we had to do contend with a murderous sheriff, a pair of serial killers and a debauched  preacher, latter brilliantly played by Robert Pattinson.

The first two acts are slow burn, setting up the characters and events, and spending too much time away from Holland's and Pattinson's. And then the third act arrives and everything goes to hell. Murders happen, the bad get their just desserts and we get a finale that we aren't very sure is a happy ending. So what happened there? Let's break down the climax of the film for you!

By the time, he takes a ride from a random hippie, Arvin had killed the debauched Preston (Robert Pattinson) for being the reason of his sister's suicide, the serial killer couple Hendersons (Riley Keough and Jason Clarke) for attempting to make him their latest 'model' and the corrupt cop Bodecker for wanting to kill him to hide his sister's crimes. Save for Preston, the rest of the murders are due to circumstances with Arvin trying to defend himself. But with blood in his hand, how long will it take to embrace the dark side?

Even when he is in the car, Arvin is trying hard not to sleep, as he is not sure the intentions of the man who gave him the ride. He does so eventually, before the scene cuts to black, leaving the audience hanging about his eventual fate.

However, just before that, the narrator (who is author Pollock himself), suggests how Arvin might be thinking of how things could have solved for the better. As he says so, we get to see how the cops find evidence of the preacher's perversions on his dead body, and another set of cops discovering Bodecker's body, and finding a picture of his sister with the dead body of their slain victim.

While this could be seen as his imagination, we have to recall an earlier scene where Bodecker was told by his colleague through wireless that the preacher wasn't a nice man. So most likely, the cops realise what Preston, Bodecker and the Hendersons were upto. OTT Releases Of The Week: Tom Holland’s The Devil All The Time, Bhumi Pednekar’s Dolly Kitty Aur Chamkte Sitare on Netflix, Mouni Roy’s London Confidential on Zee 5 and More.

The next two parts of the narration leaves things a bit shady. As Arwin tries not to doze off in the car, we hear a radio broadcast of government asking for youth to join the army as the country prepares for Vietnam War. This prompts Arvin to think of what would happen if he follows his father's footsteps and enlists himself in the army. We see a back profile of Arvin ready with his gun in the jungles of Vietnam, waiting for the attack. And finally, he thinks of a life where he meets a girl, marries her and then be a father to a son like himself. The narrator ends the scene, saying while Arvin has these visions of his future, all he wants to do now is sleep.

What Does the Ending Mean?

There is an idea here that Arvin might want to follow his father's footsteps, by joining the army and later having a normal family. His father, Willard (Bill Skarsgard) was haunted by his mercy killing of a fellow soldier, which, along with the inherent violence where he was staying, was affecting his psyche, turning his relationship with his son abusive. The image of the cross where the soldier was tied by the Japs still burnt in his mind, and he made his own cross outside his house.

Arvin, however, wasn't as pious as his father, and in the climax he actually walks away from the cross that his father had built. He may later be guilted by the killings by his hand. There is a possibility that he may be heading to a dark path, but he is more prepared for it than his father. And since it is the author himself who had narrated Arvin's story, what he says in the end could also be what happened to Arvin as an adult.

What Does the Director Say?

Speaking to Games Radar, director Antonio Campos said, "The idea was – in the book, you don’t end in Arvin’s head. The last line in the book is: ‘If he was lucky, someone would give him a ride.’ But we felt like we wanted to go one step further, and to see what happens in the car, and to see what happens when Arvin, who’s been having this insane series of days, sits down and can breathe for a moment. Where does his mind take him?" Criminal UK Season 2 Review: Ranking All Four Episodes of Kit Harington, Kunal Nayyar Netflix Series From Good to Great! (SPOILER ALERT).

Campos also elaborated on the theme of war and the toll that takes on the young men sent across the lines. He said, "we felt to really bring home the point that this story is told between two wars, that the radio and the place where his mind goes would really kind of just bring home that point – that this is a story of someone who’s coming back from the war traumatised, and someone who’s potentially going to go into another war and will experience that same trauma. So, the (scene in the) car allowed us to do all of that."
The Devil All The Time is streaming on Netflix. It has been receiving mixed to positive reviews from fans and critics.

(The above story first appeared on LatestLY on Sep 17, 2020 06:53 PM IST. For more news and updates on politics, world, sports, entertainment and lifestyle, log on to our website latestly.com).