The Devil All The Time Movie Review: Tom Holland, Robert Pattinson Embrace the Darkness in This Disturbing Netflix Drama That’s Not for the Faint-Hearted! 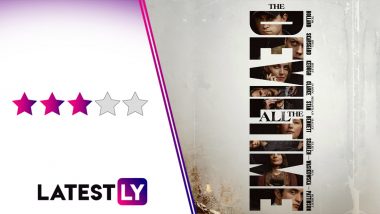 The Devil All the Time Movie Review (Photo Credit: Netflix)

The Devil All The Time Movie Review: Netflix's new film has the distinction of bringing Spider-Man, Winter Soldier, Batman (well, upcoming), John Connor, Dudley Dursley and Pennywise the Clown under one roof. But The Devil All The Time stays away from the kiddie charm of Spidey's MCU, though there is a memorable scene involving spiders. It is grittier than Batman's Gotham. Actually, in the Ohio town of Knockemstiff (apt name, indeed!) where most of the events in the film are set, Pennywise would found himself more at home. The Devil All The Time Movie: Review, Plot, Cast, Trailer, Everything You Need to Know About Tom Holland, Robert Pattinson’s Netflix Film.

Directed by Antonio Campos, on a screenplay written by him and his brother Paulo Campos, The Devil All The Time is based on a novel of the same name by Donald Ray Pollock. Pollock also serves as a narrator in the film, his gruff voice explaining the psyche of several of the characters, while also spoiling some of their fates much in advance.

The Devil All The Time moves from 1945 to 1957 to some specific period ahead, as it delves into the curses of blind belief of Catholicism (though you can relate it to any other religion), abusive nature of humans, and serial killers. Nearly all the characters you meet have bent towards the dark side or are pretty unlikeable.

The only who is tethering on the edge of darkness is the one you are supposed to root for, and that's Arwin (Tom Holland). Orphaned at a young age, Arwin is protective of his step-sister Lenora (Eliza Scanlen), another orphan. Lenora had inherited the piety of her dead parents (Mia Wasikowska and Harry Melling), both losing their lives to the insanity of blind beliefs.

Watch the Trailer of The Devil All The Time:

Arwin himself is haunted by his past demons, of being raised by an abusive father Willard (Bill Skarsgard), a WWII vet who was guilted by his killing of a mortally wounded fellow soldier, and later his wife's (Haley Bennett) demise to cancer. In his manic state, Willard had even killed a young Arwin's dog, before he committed suicide. Arwin, still troubled by what his father, continues to follow some of his teachings - like how to handle bullies.

Less likeable than Arwin and Lenora are the other main characters we meet. There is the corrupt Sheriff Bodecker (Sebastian Stan) of Meade, who wants to stay in power, even if it means murdering people. He has a younger sister Sandy (Riley Keough) and her husband, Carl (Jason Clarke). Unknown to him, they are both serial killers, with Sandy seducing and having sex with hitchhikers, and Carl photographing them in the act and later brutally murdering the victims. Or as they call them, 'models'.

Finally, there is the new preacher in Knockemstiff, Preston (Robert Pattinson), whose good looks and silver tongue are facade for his regular sins of having sexual relations with underage girls.

With so much darkness in there, The Devil All Time is definitely not for the faint-hearted. There are enough violence, perversions, murders, and blasphemous activities on display, that you hope for one character to not be so nihilistic. Bad luck there! The tone is often depressing and bleak. Things are so grim that even when the film ends on a hopeful note, you really wonder if something bad is happening when the credits are rolling.

For a film that has most of the characters obsessed with God, there is plenty for Devil to play around. Kind of what we are seeing in the real world too.

The Devil All The Time starts off slow and remains so till the third act happens. We jump from one timeline to another, the focus shifts from one character to another, and it takes more than forty minutes for Tom Holland to make his entry, and Pattinson takes even more time to do so. The good thing is that even if the characters are pretty dislikable, they are distinct and interesting, with actors putting up some fine performances. Campos' direction gives the film a brooding feel that is consistent throughout.

The bad thing is that we really need to have patience with the unfocussed narrative, with the runtime of 138 coming taxing at several occasions. Despite the languorous pacing, a couple of characters still don't really get fleshed out, Especially that of Carl's and Bodecker's.

The third act, beginning with the killing of a crucial main character, spruces up the proceedings as Arwin finally embraces his dark side. The arcs of all the main characters get merged and some of them get their just desserts, in a way that Tarantino would be proud.

Even when things don't really roll, the performances come off as a saving grace. It's a terrific turn from Tom Holland, in perhaps his most mature role to date. Holland, still keeping vestiges of his usual boyish charm, keeps us on the edge with an act that makes us pray that he doesn't go too much on the dark side. Tom Holland in Talks to Join Vin Diesel in Fast and Furious 10?

Robert Pattinson is approps creepy in a character that proves evil can come in a handsome wrapping. Bill Skarsgard owns the first act of the film with a troubled act that reminded me often of Bill Paxton in Frailty. Stan Sebastian, Jason Clarke, Riley Keough all deliver the goods. Mia Wasikowska and Harry Melling leave their marks in their smaller roles; Melling, especially incredible in his intro scene in the church.

- A Couple of Under-Developed Main Characters

(The above story first appeared on LatestLY on Sep 16, 2020 05:00 PM IST. For more news and updates on politics, world, sports, entertainment and lifestyle, log on to our website latestly.com).