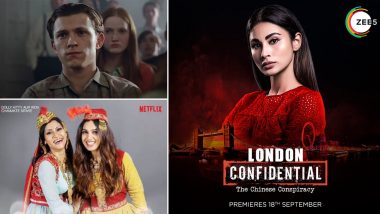 We are inching towards the third week of September in the times when COVID-19 cases are at its peak in India. For the matter of fact that theatres are shut around the country, there comes a sigh of relief when we bring you the list of every upcoming OTT releases of the week. The big release of the week is undoubtedly Tom Holland and Robert Pattinson's R-rated movie The Devil All The Time. It is all set to premiere on Netflix on September 16. The film is based on Donald Ray Pollock's 2011 debut novel of the same name. Apart from Pattinson and Holland, the film also stars the movie also stars  Bill Skarsgård, Riley Keough, Jason Clarke, Sebastian Stan, Haley Bennett, Eliza Scanlen and Mia Wasikowska. The psychological-thriller has already impressed the audiences with its official trailer and the wait is over as it releases on Wednesday. The Devil All The Time Movie Review: Tom Holland, Robert Pattinson Embrace the Darkness in This Disturbing Netflix Drama That’s Not for the Faint-Hearted!

Next one is yet another Netflix release and it is Bhumi Pednekar, Konkona Sen Sharma's all-female-led Dolly Kitty Aur Chamkte Sitare. Alankrita Shrivastava directorial revolves around the life of two cousins Konkona Sen Sharma as Dolly and Bhumi Pednekar as Kajal and how they help each other discover the true essence of freedom. The film also stars Amol Parashar, Aamir Bashir, Vikrant Massey and Kubbra Sait and is releasing on Netflix on September 18. Another movie coming to OTT platform is Hussain Zaidi's Zee5 film London Confidential, an espionage thriller starring Mouni Roy and Purab Kohli as the lead. The trailer sees RAW agent Uma (Mouni Roy) trying to prove a Chinese conspiracy against India. An undercover agent is seen trying to bring proof to Uma, but he goes missing. London Confidential is all set to premiere on Zee 5 on September 18. Dolly Kitty Aur Woh Chamakte Sitare Movie Review: Konkona Sen Sharma, Bhumi Pednekar’s Netflix Film Is Not for the Prudes

What to Watch on Netflix

What To Watch on Netflix

What To Watch on Zee5

What to Watch on Hoichoi

What to Watch on Aha Video

While Cinema across India remains shut, audiences keep track of the OTT releases including every upcoming movie and series on Netflix, Zee5, Disney+ Hotstar, Amazon Prime and More. Interestingly, Ishaan Katter, Ananya Pandey's Khaali Peeli was announced as the first Bollywood film to be released under the pay-per-view model. Stay tuned for every updates on the OTT releases.

(The above story first appeared on LatestLY on Sep 14, 2020 08:03 PM IST. For more news and updates on politics, world, sports, entertainment and lifestyle, log on to our website latestly.com).