The Devil All the Time is directed by Antonio Campos. It will drop on the streamer on September 16. But the words of the critics are out. The movie has received mixed reviews. 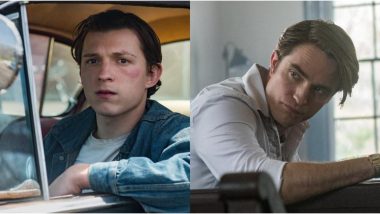 The Devil All the Time (Photo Credits: Netflix)

After establishing himself as a teen icon by playing Spider-Man/Peter Parker in the Marvel Cinematic Universe, Tom Holland is working to prove himself as a serious actor. He features in the Netflix psychological thriller, The Devil All The Time, which will drop on the streamer on September 16. But the words of the critics are out. The movie has received mixed reviews. Along with Holland, the movie also stars  Bill Skarsgård, Riley Keough, Jason Clarke, Sebastian Stan, Haley Bennett, Eliza Scanlen, Mia Wasikowska and Robert Pattinson. The Devil All The Time Trailer: Tom Holland, Sebastian Stan and Robert Pattinson's Next for Netflix is a Sinful Psychological Thriller (Watch Video).

The Devil All the Time is directed by Antonio Campos. Based on the novel by the same name, the movie centres on a young boy named Arvin Russell who fights the menacing forces of his town threatening his family. Here's what the critics are saying about the movie. Tom Holland in Talks to Join Vin Diesel in Fast and Furious 10?

Entertainment Weekly wrote, "With a cast so large and so consistently good, it's nearly impossible to single out more than a few players, though it's maybe most gratifying to see Holland so far from Peter Parker mode; his performance is delicately underplayed, which is not a claim Pattinson can probably make with a straight face."

IndieWire wrote, "Screenwriters Antonio and brother Paulo Campos can’t meet the demands of omniscient fiction, shuffling scenarios with the fervor of a manic story editor zigzagging index cards across a whiteboard. Editor Sofía Subercaseaux has a hell of a job on her hands, but it’s hard to mold this material into the shape of a feature film."

The Hollywood Reporter wrote, "Aside from strong performances across the board, credit should be given for a predictably excellent period soundtrack chosen by music supervisors Randall Poster (also a producer here, just his fourth such credit since 1990) and Meghan Currier. Setting pared-down spirituals alongside underexposed radio hits of the day, they help Devil root itself in the real but fictional-sounding hamlets of Knockemstiff, Ohio, and Coal Creek, West Virginia."

Empire wrote, "While the performances are uniformly impressive — there is honestly not a single bum note — it is all deeply dour material, only rarely relieved by the occasional bloom of human warmth, while some moments push to almost ridiculous extremes."

(The above story first appeared on LatestLY on Sep 11, 2020 10:00 PM IST. For more news and updates on politics, world, sports, entertainment and lifestyle, log on to our website latestly.com).