The Devil All The Time Trailer: Tom Holland, Sebastian Stan and Robert Pattinson's Next for Netflix is a Sinful Psychological Thriller (Watch Video)

The Devil All the Time follows the story of a disturbed war veteran, a husband and wife who are serial killers, and a false preacher. 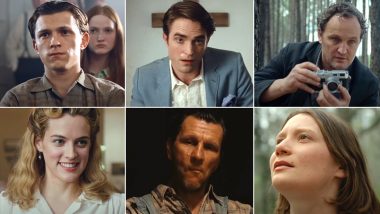 The Devil All the Time Trailer (Photo Credits: YouTube)

The Devil All the Time is Netflix's new presentation with a stellar star cast. Based on a novel by the same name, the movie is a psychological thriller set during the post World War II period. While the original novel received tons of praises with French literary publication, Lire even calling it as the best novel of the year in 2012, its movie adaptation looks equally promising. Especially Tom Holland and Robert Pattinson who grabbed all the eyeballs in its newly released trailer. Avengers Endgame Director Joe Russo Says That Tom Holland Might Win an Oscar for Cherry.

The Devil All the Time follows the story of a disturbed war veteran, a husband and wife who are serial killers, and a false preacher. Its unsettling premise and an effective narrative are expected to keep you hooked throughout. Though the trailer makes us wonder if it will be a slow-burn, the thriller elements in it should be enough to keep your momentum going. With a star cast as stellar as this, one can only expect something marvellous in the making. The film set after world war II and before the Vietnam war will follow multiple storylines that revolve around disturbed people who suffer from post-war damages. The Devil All The Time: Tom Holland, Robert Pattinson's First Looks from the Upcoming Netflix Thriller Revealed! (View Pics).

Check Out the Trailer

(The above story first appeared on LatestLY on Aug 13, 2020 07:23 PM IST. For more news and updates on politics, world, sports, entertainment and lifestyle, log on to our website latestly.com).