The Falcon and the Winter Soldier Episode 1 Review: Captain America’s Besties Are Off to a Flying Start! (LatestLY Exclusive) 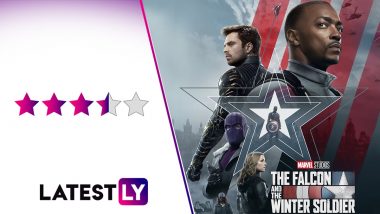 So what are these two upto post Cap's retirement? Sam is still doing his superhero duties, though with Iron Man no more and Cap gone into oblivion, the Avengers seems to be a thing of the past. Sam is working with the US military in their rescue operations, while also trying to save his family's fishing business from going bankrupt.

The more interesting thread of his arc is something he shares with Peter Parker in Spiderman: Far From Home. Like how Spidey struggled with carrying Tony Stark's legacy ahead with the Edith glasses conferred to him, Falcon is having the same with Cap's and the shield given to him. And both end up making the same mistake in giving those equipments to those who don't deserve them. In case of Falcon, it is the Smithsonian Institute that already houses other Cap artefacts.

While Falcon is coming to terms to a world where he has Cap no longer on his left, Bucky is going through a different struggle altogether. While pardoned by the US government for his past crimes, Bucky is trying to fit back in the society, attending mandated counselling sessions and even awkwardly trying out dating.

His bigger mission is, however, exorcising the ghosts of his own past as a brainwashed assassin, which includes outing hidden HYDRA supporters and doing right to the kin of his innocent victims.

The first episode of the series, directed by Kari Skogland, may not have brought together Falcon and Bucky (the latter ignoring former's messages), but it does provide the roadmap to do so. Either it could be about regaining Cap's hijacked legacy from a silly government hell-bent on bringing a symbol worthy of the Cap, which they find in their new 'Captain America' (Wyatt Russell). Or it could be about dealing with a mysterious terrorist outfit called Flag-Smashers, who wants the world to return to the way it was during the 'Blip', led by its masked leader whose strength resembles that of the Winter Soldier.

The first episode does a decent enough job of setting up our heroes' predicaments (there is another Avenger who makes an appearance) while showing how the world is coping post Endgame. The initial 20 minutes of the episode are quite exhilarating, including a mid-air rescue operation involving the Falcon near Libya. The whole sequence would have been an absolute treat on the big screen, and since that won't happen, it is highly recommended to be watched on a HD TV if possible.

Unlike WandaVision which went for a television format (and rightly so for its theme), the treatment given to The Falcon and The Winter Soldier is more cinematic. At the same time, the mini-series approach allows the characters more room to breathe, and since, both Sam and Bucky weren't given to do so in the movies, this is quite good. Sam's portions with his sister Sarah (Adepero Oduye) shows the family side of an Avenger, something that was only seen for Hawkeye in the MCU. Anthony Mackie is a wonderful actor and it feels really good to see MCU let the actor shine without Cap's righteousness dazzling on him. WandaVision Finale Ending Explained: What Do the Two Post-Credit Scenes Mean for Elizabeth Olsen’s Scarlet Witch and Marvel Phase 4?

Even seeing Bucky trying to fight the pain of what his past has done to innocent victims makes for a baleful watch, with some fine understated performance from Stan. Also loved how the episode used the Winter Soldier theme music during a lunch convo scene, as the camera focuses on his troubled face.

While it is just a start, at least the first episode of The Falcon and The Winter Soldier lets us know where it is headed. Unlike WandaVision, where it took us to the fourth episode to even understand what Wanda is upto. If that was Marvel experimenting with the freedom that small screen gives in going weirder than what a mainstream product can ask for, then The Falcon and The Winter Soldier simply takes the straight road, but dazzles and thrills you as it sets out. In both the cases, it's a big hurrah for the Marvel fans. Just let's go slow on the fan theories, this time!

Overall, The Falcon and The Winter Soldier takes off to a flying start, even if we don't get the two Avengers together on screen in the first episode. It does a good job of setting up their post-Blip predicaments, offers a great action scene, teases the antagonists while not overplaying on the Captain's looming shadow. The Falcon and The Winter Soldier is streaming on Disney+ Hotstar Premium in India from March 19.

(The above story first appeared on LatestLY on Mar 18, 2021 10:02 PM IST. For more news and updates on politics, world, sports, entertainment and lifestyle, log on to our website latestly.com).