The Flash: Set Leaks Confirm That Ben Affleck Will Suit Up As Batman and Flaunt His New Ride (View Pics and Videos)

With Ben Affleck’s return, many speculated whether he will just make a comeback as Bruce Wayne or will he be donning his outfit too? Well, with the recent set leaks, we finally have our answer. You can check them out here. 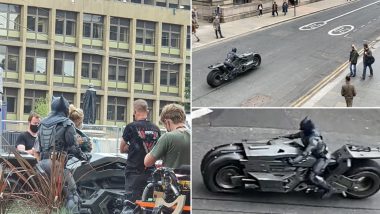 The Flash has its production coming along really well and thanks to set leaks it has given us an idea of what the film will look like. Described as a loose adaptation of the iconic comic storyline Flashpoint Paradox, according to the set leaks it looks like The Flash is setting up to be something special. The Flash will see Ezra Miller return in the role of the Scarlett Speedster, alongside him we will even be introduced to Sasha Calle as Supergirl and for the first time since Batman Returns, Michael Keaton will don the role of the Caped Crusader again. But Michael Keaton isn’t the only one returning as Batman, Ben Affleck will also return as the Dark Knight in The Flash. The Flash: 5 Details We Learnt From the New Leaked BTS Stills of Ezra Miller’s Upcoming DC Movie!

The return of Ben Affleck in the role has gotten the fans most excited after he seemingly stepped down from the role back in 2019. Many are saying that his appearance in The Flash will be the final time he will be portraying Bruce Wayne/Batman. With Affleck’s return, many speculated whether he will just make a comeback as Bruce Wayne or will he be donning the outfit too. With recent set leaks, we finally have our answer. You can check them out below.  The Flash: From Michael Keaton’s Batman to Sasha Calle’s Supergirl, 5 Leaked BTS Pictures That Have Us Excited for Ezra Miller’s Next DC Outing.

Check Out The Leaked Pics:

WATCH: Hey look, it's #BatAffleck’s #Batman going for a ride in #GothamCity in #TheFlashMovie! pic.twitter.com/BqSFoOcn1h

Not a bad view from the office! #batman pic.twitter.com/TdzPo63ZdS

Well, the leaks have us even more excited for what The Flash has in store for us. It definitely feels like The Flash is setting up to be something special with all the returning actors and heroes. If you want to read up about the previous leaks, you can check them out below. The Flash starring Ezra Miller, Michael Keaton, Sasha Calle, and Ben Affleck is scheduled to release on November 4, 2022.

(The above story first appeared on LatestLY on Jul 27, 2021 04:54 PM IST. For more news and updates on politics, world, sports, entertainment and lifestyle, log on to our website latestly.com).