Last weekend, The Flash had many BTS set photos of it leaked on the internet. It featured various things that will have fans surely excited about the Scarlet Speedster’s next outing. Read on. 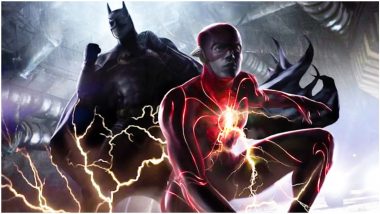 The Flash which is currently under production has a lot of DC fans excited. Directed by Andy Muschietti of IT fame, The Flash sees the return of Ezra Miller in the role of Barry Allen. The Flash will be a loose adaptation of the iconic story, The Flashpoint Paradox, and will be the twelfth film in the DC Extended Universe (DCEU). Along with the return of Miller, Michael Keaton also reprises his role as Batman for the first time since Batman Returns and the film will introduce Sasha Calle as Supergirl. It will even feature Ben Affleck in the role of Batman and according to reports may be the last time we see him as the caped crusader.  The Flash Movie: Andres Muschietti Reveals the Logo of Ezra Miller Starrer Film (View Pic).

Last weekend, The Flash had many BTS set photos of it leaked on the internet. It featured various things that will have fans surely excited about the Scarlet Speedster’s next outing. It gave us a glimpse at the classic Tim Burton batmobile and gave us a full new look at Sasha Calle’s Supergirl suit along with the cape. So here are five details that we learned about The Flash from the new leaked BTS stills. The Flash: Director Andy Muschietti Shares Supergirl's New Supersuit From Barry Allen's Standalone Film.

*NOTE: WE CAN’T SHOW THE PHOTOS DUE TO A STRICT DMCA POLICY BY WARNER BROTHERS*

While previously we did get photos of her in her suit, the key factor that was missing from it was the cape. We recently got a new look at her suit which featured the cape and looks amazing. The photo had her standing in front of a green screen, meaning she was shooting a scene involving special effects. If the leaked promo that surfaced last month is also anything to go by, it looks like Supergirl will take over Kal-El’s role from the Flashpoint comic.

The new leaks even featured Ezra’s stunt double with a similar look but a different haircut. This has led us to believe that maybe we might see two different Barry Allen’s in the film. Considering how The Flash is a multiverse story, that doesn’t seem too long of a reach.

We get a new look at what the Batcave might end up looking like. While there was a lot of green screens present in the still, it showed that it had a modernistic touch and upgraded look from when we last saw it in Batman Returns. Nevertheless seeing Tim Burton’s Batcave but modernized, surely has our interests piqued.

Barry in the Batcave

One still even featured Barry with long hair inside the Batcave. Seeing as to how his face had a shocked expression, we can assume that it might be at the start of the film. Mostly after he causes a ripple in the timeline. The Flash: Andy Muschietti Begins Production on Ezra Miller’s DC Superhero Film, Title Motion Poster Unveiled (Watch Video).

This is the one that is going to have all the fans erupt in cheers. Tim Burton’s classic Batmobile will be featured in The Flash. It maintains the same iconic look it had back in the day. No modifications seemed to have been made to it, it still looks as cool as we saw it last in Batman Returns. Considering how iconic this Batmobile has been, it’s great to see that they aren’t changing its look.

(The above story first appeared on LatestLY on Jul 19, 2021 04:59 PM IST. For more news and updates on politics, world, sports, entertainment and lifestyle, log on to our website latestly.com).