The Flash: From Michael Keaton’s Batman to Sasha Calle’s Supergirl, 5 Leaked BTS Pictures That Have Us Excited for Ezra Miller’s Next DC Outing

With new set photos being dropped yesterday, they give us a better look at the characters and how they might be incorporated into the story. So here are a few of the BTS pictures that have us excited for The Flash. 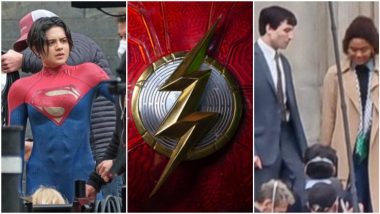 The Flash: 5 Leaked BTS Pictures That Have Us Excited for Ezra Miller’s Next DC Outing (Photo Credit: Twitter)

The Flash, starring Ezra Miller, finally started filming back in April after a long list of delays and development hiccups. Directed by Andy Muschietti of IT and IT: Chapter II fame, The Flash sees Barry Allen travel back in time to prevent the murder of his mother, which brings unintentional consequences. The Flash will be a loose adaptation of the hit comic, Flashpoint Paradox written by Geoff Johns. The Flash also marks the return of Michael Keaton in the role of Bruce Wayne/Batman as he reprises his role the first time since Batman Returns. Ben Affleck also stars in the film in what is presumably his final appearance as the DCEU caped crusader. The Flash also stars newcomer Sasha Calle as Supergirl, although what version of Supergirl she will be playing still remains a mystery with some theorizing her to be Lara Lane Kent. The Falcon and The Winter Soldier: 5 Important Easter Eggs That You Should Not Ignore From The First Three Episodes!

With filming underway and The Flash set to release next year, it has us excited for the next DC entry as we will finally get to see the Scarlet Speedster in action again in his own film. Now of course with the filming going on there will be photos of the set leaking and so is the same case here with The Flash. With new set photos being dropped yesterday, they give us a better look at the characters and how they might be incorporated into the story. So here are a few of the BTS pictures that have us excited for The Flash.  Solos Review: Anne Hathaway, Anthony Mackie’s Sci-Fi Series Has an Interesting Concept That’s Let Down by Its Execution (LatestLY Exclusive).

In a photo of Ezra Miller just standing while wearing a trench coat, if you peek at his left hand you can see him wearing the iconic Flash ring from the comics. The ring basically stores his suit as it allows him to change in and out of it quickly. It’s a great nod to the comics as it establishes the fact that they are embracing more of the campy side of the Flashy mythos.

Ezra Miller as Barry Allen on the set of THE FLASH. pic.twitter.com/iQDVHHboJn

The Flash also sees the return of Michael Keaton as Batman. With the set photos of his mansion being previously leaked last month, recently we saw the man himself on the set as it offered us our first look at his Bruce Wayne. It would be great to see his Batman meet Ben Affleck’s version as it would really drive home with the concept of DC’s multiverse.

This is his car, not Affleck’s, and I hear this is from the end of the movie and he’s now permanently in the #DCEU

Video tomorrow with full breakdown of all these set pics! pic.twitter.com/pO38KSIUUJ

We just got to see a brief bit of Clemons as Iris West in Zack Snyder’s Justice League which isn’t considered canon, and with her appearance being cut out from the theatrical cut of Justice League, it will be great to see her reprise the role of Iris West since she is one of the most important characters in Barry Allen’s story. Sweet Tooth Review: DC’s Netflix Series Is a Sweet, Hopeful Journey Through a Dystopian World (LatestLY Exclusive).

Andy Muschietti revealed a while back on his Instagram that Sasha Calle had been cast in the role of Supergirl in a wholesome video that went viral. The details of which version of Supergirl she is playing still remain a mystery, but with yesterday’s set photos we might have a clear idea. Her suit bears a similar resemblance to that of Lara Lane Kent, the daughter of Clark Kent, and might hint towards the fact that she might not be the Kara Zor-El version of Supergirl. It would make sense for them to adapt this version of Supergirl as the character is relatively new and will help differentiate themselves from The CW’s version of Supergirl.

A couple of months back when the shooting started, we got our first look at Wayne Manor. The interesting part about it is that it doesn’t resemble Keaton’s previous Wayne Manor from the Burton films. It’s much larger and grand and looks like Keaton’s Wayne might have reconstructed his house. Whatever the case might be, it’s great to return to Keaton’s universe of the caped crusader.

This is already happening!!

These BTS pictures of The Flash have us certainly excited as it seems like it’s shaping up to be something really special. The Flash is slated to release on November 4, 2022.

(The above story first appeared on LatestLY on Jun 21, 2021 05:11 PM IST. For more news and updates on politics, world, sports, entertainment and lifestyle, log on to our website latestly.com).