Thor: Love and Thunder – Matt Damon Joins Chris Hemsworth and Team for the Fourth Instalment of the MCU Film

The details about his role have not been out yet but it is said to be a significant one. When last seen in the movie, he essayed the role of an Asgardian actor who was attacked by Hela and Surtur. 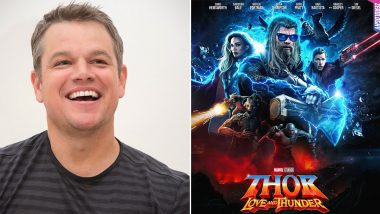 Speculations around Matt Damon being a part of Chris Hemsworth starrer Thor: Love and Thunder have been going around for quite some time now. The actor was seen in a comic cameo in the film before but now with his arrival in Australia, it is confirmed that he indeed a part of the fourth instalment of the Marvel film. The actor flew to Sydney along with his family a few days back and is now quarantining for the next two weeks before he begins filming for the superhero movie. Thor: Love And Thunder - From Natalie Portman's Return To Valkyrie's LGBTQ Reveal; All You Need About Cast and Release Date of Chris Hemsworth's Film!

The details about his role have not been out yet but it is said to be a significant one. When we last saw Damon in Thor, he was cast as an actor playing Loki in a play. Loki, disguised as Odin, was watching this play when Thor first arrives in Asgard in Thor: Ragnarok. The scene also featured Sam Neil and Luke Hemsworth. Back then, we didn't know if Matt Damon's character survived Hela or Surtur's attack on Asgard or Thanos' attack on Thor's ship. Now it looks like Damon's character did survive. Or he could be playing an entirely new character here. Directed by Taika Waititi, Thor is the only superhero franchise within the MCU to get a fourth instalment.

Matt flew to Australia with wife Luciana Barroso and children, Isabella, Gia, and Stella. On his arrival in the country, Matt told DailyMail, " I'm so excited that my family and I will be able to call Australia home for the next few months. Australian film crews are world-renowned for their professionalism and are a joy to work with so the 14 days of quarantine will be well worth it. Australia definitely is a lucky country." Ben Affleck, Matt Damon and Other Hollywood Celebs Raise $1.75M To Feed America Through Online Poker.

The film will see Chris Hemsworth reprising the role of Thor once again. Natalie Portman will return as Jane Foster. She will also essay the role of female Thor in the movie. Tessa Thompson will reprise her role as Valkyrie, the reigning queen of Asgard. Jaimie Alexander was confirmed to essay the role of Lady Sif while Christian Bale will play the main antagonist, Gorr the God Butcher. Thor: Love and Thunder is scheduled to hit the theatres on May 6, 2022.

(The above story first appeared on LatestLY on Jan 18, 2021 02:43 PM IST. For more news and updates on politics, world, sports, entertainment and lifestyle, log on to our website latestly.com).