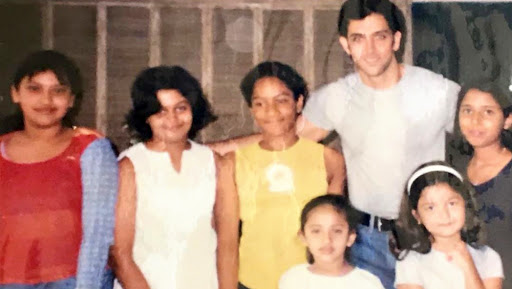 Mumbai, June 13 (IANS) A childhood photograph of actor Hrithik Roshan, Alia Bhatt and Masaba Gupta at a party together has surfaced on social media which has left their fans excited. The image was shared by producer Anu Ranjan on Instagram. The caption reads: "These are the most adorable ones, without realising." Alia's sister Shaheen Bhatt is also in the image as are Anu's daughter Akanksha and Anushka. Hrithik Roshan Shares a New Super 30 Still With His Students, Says; No Difference Between Mathematics and Life; See Pic!

Hrithik can be seen in a white t-shirt paired with blue jeans, while Alia stands beside him in a white dress with a matching hairband. Shaheen commented on the image: "Why Anu aunty, why." to which Anu replied: "Haha still as adorable." Several social media users wrote: "Hrithik is so handsome. Masaba and Alia are cute." Another wrote: "Hrithik looks the same even after so many years. Wow!" Here's What Salman Khan Thinks About His On-Screen Chemistry With Alia Bhatt in Sanjay Leela Bhansali's Inshallah

These are the most adorable ones ,without realising 💞💞

On the Bollywood front, Alia is gearing up for the release of "Brahmastra", which also stars Ranbir Kapoor and Amitabh Bachchan.  Hrithik awaits the release of Super 30, based on the maths wizard Anand Kumar and his 30 students.