Raju Srivastava delivered a powerful message asking people to report the use of spiked bits to police and to have a horse-free wedding. 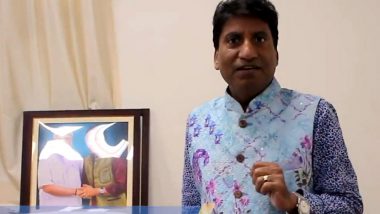 The People for the Ethical Treatment of Animals (PETA) India has written to union minister for fisheries, animal husbandry and dairy, Parshottam Rupala, requesting him to honour late comedian Raju Srivastava for his contribution in prohibiting the sale, manufacture, trade, and possession of illegal spiked bits which are used to control horses. When Raju Srivastava Boarded a Train to See an Ailing Amitabh Bachchan.

In the PETA India video, which was produced on the heels of an enforcement drive conducted by Lucknow police in which 70 spiked bits were seized, Raju Srivastava delivered a powerful message asking people to report the use of spiked bits to police and to have a horse-free wedding. Raju Srivastava Demise: Late Comedian’s Abusive Comments on Social Media Go Viral After Rohan Joshi Calls His Death Good Riddance (View Post).

Srivastava (58) passed away on Wednesday in AIIMS Delhi, where he was admitted after suffering a heart attack while working out at a gym on August 10.

(The above story first appeared on LatestLY on Sep 22, 2022 12:41 PM IST. For more news and updates on politics, world, sports, entertainment and lifestyle, log on to our website latestly.com).