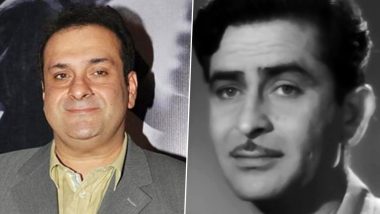 Bollywood actor and filmmaker Rajiv Kapoor has breathed his last today in Mumbai. The 58 year old suffered a massive heart attack. The youngest son of late legend Raj Kapoor, Rajiv had shot to fame with Raj Kapoor's 1985 directorial blockbuster Ram Teri Ganga Maili that co-starred Mandakini. He was also seen in films such as Lava, Zalzala and Zabardast. Rajiv also tried his hand at direction with the Rishi Kapoor-Madhuri Dixit starrer Prem Granth.

When his father's Raj Kapoor’s RK studio from Mumbai's suburb Chembur, was up for sale, as it was not economically viable to rebuild it, an emotional Rajiv had spoken his mind at the last Ganpati festival celebrated at the aforementioned studios which had seen the success of some iconic films. An emotional Rajiv apologized to his late father for having to arrive at that tough decision. Rajiv Kapoor's Demise: Kareena Kapoor, Tara Sutaria, Ranbir Kapoor Arrive at Late Actor’s House (View Pics)

"We all are emotional as we are excited for this last Ganpati at RK Studios. But we had to be practical (about making the decision). We built this studio thanks to the blessings, hard work, and dedication of my grandfather and my father. Please forgive us, Papa! We had to take this step after thinking collectively about it. This studio is very far from the city and most actors find it difficult to travel so far to film here. Back in the day actors would come here as the traffic was at ease, but unfortunately, that's not the situation anymore. So considering all these equations, we had to make a concrete choice." he had said. Rajiv Kapoor No More! The Veteran Actor Was Supposed To Make A Comeback To Acting With Toolsidas Junior After Three Decades

Rajiv was also hopeful that RK Films will continue to flourish and some really good films will be made under the banner. "But we will continue to take the tradition of making films under the same banner even if we are shifting our office from this space. With a heavy heart, we had to make this conscious choice for which I must apologize to my father."

(The above story first appeared on LatestLY on Feb 09, 2021 06:30 PM IST. For more news and updates on politics, world, sports, entertainment and lifestyle, log on to our website latestly.com).