Rajiv Kapoor No More! The Veteran Actor Was Supposed To Make A Comeback To Acting With Toolsidas Junior After Three Decades

Rajiv Kapoor was supposed to end his retirement from acting with Ashutosh Gowariker's Toolsidas Junior this year. The movie is based on a snooker champion. The actor left for the heavenly abode today. 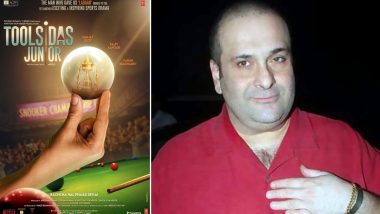 Bollywood lost yet another precious talent with Rajiv Kapoor breathed his last today leaving all of us bereaved. 2021 was supposed to be a great year for the veteran actor as he was returning to acting after nearly three decades. Last December, T-series announced Toolsidas Junior with Rajiv Kapoor, Sanjay Dutt and Varun Buddhadev. The movie is based on a snooker champion and Dutt was to play a cameo in the film. The last time Rajiv Kapoor faced the camera as an actor in 1990's Aag Ka Dariya and Zimmedaar. Neetu Kapoor Confirms Rajiv Kapoor Passes Away At 58

The first look poster of the film Toolsidas Junior was also released which has someone holding the snooker ball with the table in full view.

A MUSIC association now steps up to become a MOVIE collaboration!!!

It is too early to know who will replace Rajiv Kapoor in the movie now. Stay tuned to this space to know more about Rajiv Kapoor.

(The above story first appeared on LatestLY on Feb 09, 2021 02:14 PM IST. For more news and updates on politics, world, sports, entertainment and lifestyle, log on to our website latestly.com).