Sachin Pilgaonkar Shares Worries on Being Stereotyped as ‘Marathi Actor-Director’

Veteran Actor Sachin Pilgaonkar apparently has done more Hindi films then Marathi films, however the actor is often defined as a Marathi actor and director. 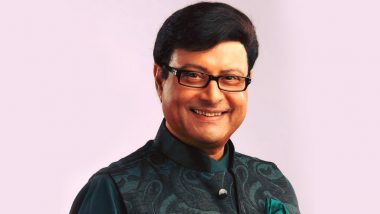 Veteran Actor Sachin Pilgaonkar apparently has done more Hindi films then Marathi films, however the actor is often defined as a Marathi actor and director. "I have worked more in Hindi films than Marathi films. I don't want filmmakers to put a stamp that if it's a Marathi character then only they think about me. I have a good command over Hindi language and have been part of some great films in Hindi cinema," Sachin told IANS. Planet Marathi Founder Akshay Bardapurkar Felicitated by Maharashtra Governor (See Pics).

The actor was recently seen in the web series 'City of Dreams' seasons 1 and 2, where he played the role of the Chief Minister of Maharashtra. The actor shared that he doesn't want Hindi filmmakers to only think of him as a Maharashtrian character. Sachin started his career as a child artist in the Marathi film, 'Ha Majha Marg Ekla' in 1962 while he was six years old. Marathi Art Director Raju Sapte Found Dead at Home; Cops Register Abetment to Suicide Case.

He went on to work in around 65 films as a child artist, before switching to adult roles, and being part of highly successful films like 'Geet Gaata Chal', 'Balika Badhu', 'Ankhiyon Ke Jharokhon Se' and 'Nadiya Ke Paar' as a lead actor and he became a household name.

Off late, the actor has not been offered substantial roles in Hindi films and web series. The actor was last seen in Yash Raj Films, 'Qaidi Band' (2017) and 'Hichki' (2018). He attributes his less visibility in Hindi films to being a Marathi director. "When an actor becomes a director his acting assignments reduce in number. After a long time some people thought of me, when I did 'Hichki' and 'Qaidi Band'. In our industry when any actor becomes a successful director in any language, immediately people from the industry start jumping to the conclusion that he has left acting. Nowhere, I have claimed that or declared that I will not act anymore."

He added: "And then they think that I have become successful so I would be very busy directing Marathi films. They don't ask if I would want to act in Hindi films. They assume that I am busy." "The third thing I feel, they have assumed that I will now interfere in the making of the film. So they withdraw. But once you will work with me then only you will understand the truth."

"There was never a thing like - I never wanted to work in Hindi films. I cannot go and jump into a film which is being made. Somebody has to think about me, approach me or cast me," signed off Sachin.

(The above story first appeared on LatestLY on Jul 29, 2021 07:23 PM IST. For more news and updates on politics, world, sports, entertainment and lifestyle, log on to our website latestly.com).