The Haryanvi dancer-singer was recently blessed with a baby boy and her husband, Veer Sahu confirmed the same via his Facebook live. 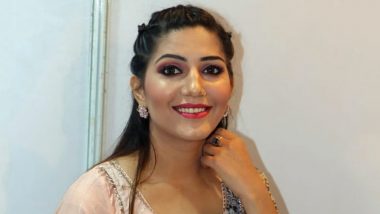 Congratulations are in order for Sapna Choudhary as she has embraced motherhood. The Haryanvi singer was recently blessed with a baby boy and her husband, Veer Sahu confirmed the same via his Facebook live. The couple is certainly elated for this new addition to their family and we send our best wishes to the newborn. While there were reports if the dancer-singer has tied the knot in an intimate ceremony, Sapna never confirmed the same but we are glad to realise it finally. After Sapna Choudhary, Veer Sahu Takes Haryana by Storm with His Music Skills.

As per reports in Dainik Jagran, Sapna and Veer were in a relationship for several years and they got married in January 2020. The couple wanted to keep their wedding ceremonies very private and hence decided to have an intimate celebration. While Sapna is very active on social media, here's waiting to see if she'll share the pictures of her newborn with her social media family anytime soon.

Thank you for making me my trip so memorable, I will cherish every second of this beautiful journey! I’m so glad I planned this trip, coz god wanted me to meet such amazing people, I’m happy I came and I went back with bunch of memories! @veersahuofficial

Sapna first met Veer (Babbu Mann) in 2015-16 during an award ceremony and she barely had any interaction with him then. It was only after two or three meetings that they exchanged few words and eventually started talking. The couple then fell in love and rest, as they say, is history.

(The above story first appeared on LatestLY on Oct 07, 2020 10:27 AM IST. For more news and updates on politics, world, sports, entertainment and lifestyle, log on to our website latestly.com).