Sapna Choudhary Gets Engaged to Beau Veer Sahu in An Intimate Ceremony? 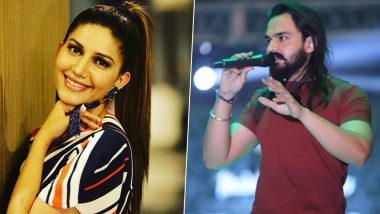 Haryanvi superstar, Sapna Choudhary is happily taken as we hear reports of her secret engagement. This former Bigg Boss contestant whose name is synonymous with the Haryana film industry exchanged rings with her boyfriend, Veer Sahu, who's equally a famous name and a singer in the same industry. As per reports in Aaj Tak, the couple has decided to keep their engagement news extremely private but a wedding is on the cards very soon. Sapna Choudhary or Rakhi Sawant, Which Diva Dancing on ‘Teri Aakhya Ka Yo Kajal’ Song in WWE Ring Won Your Heart? Watch Viral Video to Decide.

Sapna first met Veer (Babbu Mann) in 2015-16 during an awards show and she barely had any interaction with him then. It was only after two or three meetings that they exchanged few words and eventually started talking. She initially thought of him as snobbish who barely interacts with anyone outside his circle.

Thank you for making me my trip so memorable, I will cherish every second of this beautiful journey! I’m so glad I planned this trip, coz god wanted me to meet such amazing people, I’m happy I came and I went back with bunch of memories! @veersahuofficial

Coming to the singer, he's very passionate about his work and he even left his MBBS education to pursue his love for singing. .Coming from a family of farmers, it was really tough for him to become a singer since he didn't have strong support from his family members. However, his first song ‘Thaddi Baddi ' changed his fortune. It went on to become a massive hit and made a record  for him being the 'only Indian singer whose debut song listed in top 20 iTunes.'

(The above story first appeared on LatestLY on Mar 16, 2020 04:56 PM IST. For more news and updates on politics, world, sports, entertainment and lifestyle, log on to our website latestly.com).