Acharya: Ram Charan to Play a Naxalite in Father Chiranjeevi's Next?

As per new reports, Ram Charan is gearing up to play the role of a Naxalite in father Chiranjeevi's next. 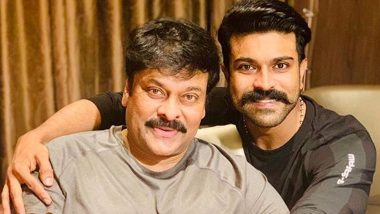 Megastar Chiranjeevi is gearing up to resume shooting of his next, Acharya, the one that also stars his son, Ram Charan. This father-son duo is collaborating for Koratala Siva's next directorial and the excitement for the same is already at an all-time high. While we know Charan has an extended cameo in the movie, what we didn't know were his character details until today. As per new reports, Ram Charan is expected to play a Naxalite in the movie and will start shooting for his scenes next month. Trisha Walks Out Of Chiranjeevi's Acharya Citing 'Creative Differences' - Read Tweet.

Ram Charan will have a more or less 30 mins of screentime in the film and he'll appear in flashback scenes. His character loses his life while working on a mission. The same mission then inspires Chiranjeevi's character and he decides to take it forward. The makers have also planned a look test for Charan's character. The father-son duo is also expected to appear in a song together and that is touted to be the major highlight of this Koratala Siva directorial. While Kajal Aggarwal is on board to star opposite Chiranjeevi, makers have apparently roped in Rashmika Mandanna as the female lead opposite Ram Charan.

Post his shooting for Acharya, Ram Charan is expected to join Jr NTR for SS Rajamouli's RRR. The director is currently chalking out his new shooting schedule and expects to start rolling by October end. Chiranjeevi is meanwhile eyeing for an April 2021 release date for Acharya.

(The above story first appeared on LatestLY on Sep 24, 2020 12:44 PM IST. For more news and updates on politics, world, sports, entertainment and lifestyle, log on to our website latestly.com).