Ajay Devgn Has an Extended Cameo in SS Rajamouli's RRR? 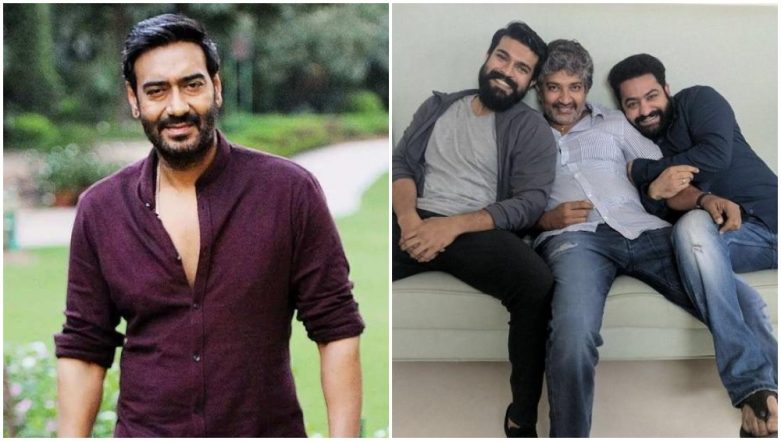 Ajay Devgn has a cameo in RRR? (Photo Credits: Instagram)

Ajay Devgn's collaboration with Baahubali fame director, SS Rajamouli was big news to digest. The actor's decision to foray into South cinema with RRR did come as a pleasant surprise and we are glad he decided to go ahead with it. Though we read reports about him being in talks to star in Shankar's Indian 2 with Kamal Haasan, he refuted them completely. Guess, it was the piece of gossip surrounding Rajamouli and Shankar's project didn't even cross his mind. The movie that also stars Jr NTR, Ram Charan, Alia Bhatt and Daisy Edgar-Jones in the lead role is a period drama set in the 1920s. It revolves around two freedom fighters and Ajay merely has an extended cameo in it.  Inshallah, RRR, Brahmastra: Which Alia Bhatt Movie Are You Most Excited About?

According to the reports in India Today, a source close to the project has revealed details about Ajay's role in the film. As per the source, he has more of an extended cameo in this period drama and he was in fact impressed with Rajamouli's narration of the same. While the film sees Jr NTR and Ram Charan as Telugu freedom fighters, a major part of the story will pan out in New Delhi where Ajay's character comes in. Apparently, the Bollywood star has been roped in to play a freedom fighter of those times," the source said.

Ram Charan plays Alluri Seetharamaraju and Jr NTR essays the role of Komaram Bheem. When we tried to study these freedom fighters and gather some knowledge about them, we came across their Wikipedia page that suggests that Seetharamaraju was immensely inspired by Bhagat Singh and other freedom fighters from the North. We wonder if Devgn is set to reprise his role as Bhagat Singh once again in this movie. #RRRTitle Trends as SS Rajamouli Wants a Fan-Made Abbreviation For His Magnum Opus! Have You Tried Your Luck? (Read Tweets)

"He (Ajay) wasn't sure because the part is not very long. It is almost like an extended cameo and he wasn't sure about doing it. But after a narration from Rajamouli, he got excited. It was also one reason why Ajay initially had given a statement saying he wasn't doing the film at all. Things worked out eventually," the source further added. Well, his inclusion has only intrigued us further. The movie is all set to hit the screens on July 30, 2020, and clash with Ranbir Kapoor's Shamshera.