Nithiin will be reprising the role of Ayushmann Khurrana in the Telugu remake while Tamannaah Bhatia has been roped in to reprise Tabu's role from the original. South actress Nabha Natesh will be seen as the leading lady. 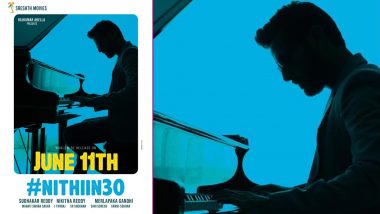 Andhadhun starring Ayushmann Khurrana, Radhika Apte and Tabu was a massive hit. The film received many accolades and praises from the critics and now the film is all set to get a Telugu Remake. Starring Nithiin, Tamannaah Bhatia and Nabha Natesh in the lead roles, the film has been making the right kind of noises ever since its announcement. The untitled film is being helmed by Merlapaka Gandhi and the makers have finally shared the first look of the remake today. Nithiin to Star in Andhadhun Telugu Remake! View Pics from the Untitled Project’s Puja Cermony in Hyderabad.

Featuring Nithiin, the poster looks quite intense. We get to see a silhouette of the actor playing the piano. He is seen wearing the iconic black glasses in the picture and it will definitely pique fan's excitement for the film. Tammannah shared the poster on Twitter and said that the audience will be amazed to see Nithiin in a never-seen-before avatar. With the poster, it was also announced that the film will be hitting the theatres on June 11, 2021. The title of the film is yet to be announced.

The film is currently being shot in and around Hyderabad. The film also marks Nithiin's second collaboration with Mahati Swara Sagar who gave chartbuster album for the actor hit film Bheeshma. Fans are excited to see Nithiin in the film as he will be seen in an extraordinary role which he has never experimented with in his career so far. Nithiin will be reprising the role of Ayushmann Khurrana in the Telugu remake while Tamannaah Bhatia has been roped in to reprise Tabu's role from the original. South actress Nabha Natesh will be seen as the leading lady. Andhadhun Telugu Remake: Tamannaah to Reprise Tabu's Role, Nabha Natesh Roped In to Play Radhika Apte's Part For the Nithiin Starrer.

N Sudhakar Reddy and Nikitha Reddy are producing the movie on the Sreshth Movies banner. Andhadhun, the original film was directed by Sriram Raghavan and won massive critical acclaim. The film also received a China release and was a box office hit. The film starred Ayushmann in the role of a blind pianist and the thriller had several twists and turns with a rather interesting ending.

(The above story first appeared on LatestLY on Feb 19, 2021 12:11 PM IST. For more news and updates on politics, world, sports, entertainment and lifestyle, log on to our website latestly.com).