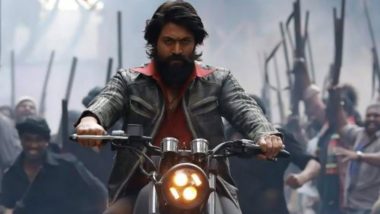 This can be 'THE' moment for all Yash fans, as here's a piece of good news with regards to his upcoming film KGF: Chapter 2. As going by an update online, the flick's official teaser is just a few days away and is all set to be out on January 8, 2020. Yup, you read that right. A fan handle of the South star has shared a video on Twitter that sees the announcement about the forthcoming movie's teaser and it's all things gold. In the clip at the end, we can also hear the audience (fans) in the background going all gaga over the same. Yash-Sanjay Dutt Starrer KGF Chapter 2 First Look to Release on 21 December, Fans Go Crazy With Excitement!

For the unversed, the first instalment of K.G.F garnered praises from audience and critics alike which also lead to the movie's box office success. Also, firstly the made it to the theatres in Kannada and then the dubbed versions were later released in Tamil, Telegu, Malayalam and Hindi. Not just this, K.G.F Chapter 1 has also grabbed many several awards. Coming back to the movie's teaser date, it also marks the lead star's birthday. KGF Chapter 2: Sanjay Dutt Begins Shooting in Hyderabad, Shaves His Head for Adheera's Character (See Pics).

K.G.F: Chapter 2 will see Bollywood actor Sanjay Dutt making his debut in the Kannada industry. Apart from these stars, the film also will see Raveena Tandon, Srinidhi Shetty, Anant Nag and Malavika Avinash essaying key roles. Reportedly, K.G.F part 2 is set to hit the silverscreen on July 2020. However, there is no official statement regarding the release from the makers yet. Stay tuned!

(The above story first appeared on LatestLY on Jan 04, 2020 07:21 PM IST. For more news and updates on politics, world, sports, entertainment and lifestyle, log on to our website latestly.com).