The action film backed by Farhan Akhtar and Ritesh Sidhwani also turned out to be the winner at the ticket windows. Now, to the delight of the fans, the makers released the first look release date and it is December 21. 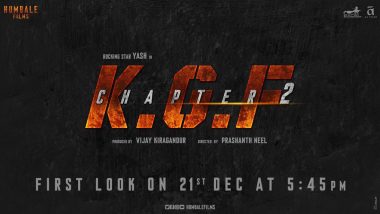 Yash and Sanjay Dutt are here to enthrall the audience once again! The south film which was released in multiple languages was hailed by the fans to the core. The action film backed by Farhan Akhtar and Ritesh Sidhwani also turned out to be the winner at the ticket windows. Now, to the delight of the fans, the makers released the first look release date and it is 21 December at 5.45 pm! KGF Chapter 2: Sanjay Dutt Begins Shooting in Hyderabad, Shaves His Head for Adheera's Character (See Pics).

Sanjay Dutt too tweeted about the same saying, "The journey of Adheera begins... #KGFChapter2 first look out on 21st Dec. It's been a wonderful experience being a part of the KGF franchise!" The fans are super excited to see this deadly combo in the actioner and also Dutt's look as Adheera. As soon as the announcement was made, Twitterati started trending the film on the micro-blogging site like no one's business! Check out the picture and the fan-tweets below.

Why You Should Watch This Film!

*Most anticipated movie of 2020

*Most anticipated blockbuster sequel of #KGFChapter1

*Movie which redefined the meaning of Action mass movie

*Most anticipated movie from South India

Second highest grossing film of south in 2020 after #RRR !

Earlier, director of the flick, Prashanth Neel shared the pic of Dutt on the sets of the film. We can see him in a bald and bearded look and this itself is enough to expect some brand new look of him in the flick. In the sequel, he will play the antagonist, something that he has played several other times. It should be noted that the first installment received two National Film Awards this year, for its action and special effects. It has to be seen whether the second installment too lives up to the expectations of the fans.

(The above story first appeared on LatestLY on Dec 14, 2019 12:47 PM IST. For more news and updates on politics, world, sports, entertainment and lifestyle, log on to our website latestly.com).