Sanjay Dutt is all set to be seen playing the role of a baddie again in the much-awaited sequel of the super successful Kannada film, KGF starring Yash. The actor has now begun shooting for the sequel of the film and here are some new pictures from the sets of the film. 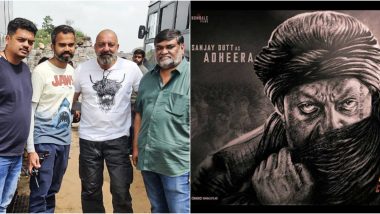 In July 2019, the makers treated us with the first look of Sanjay Dutt's character Adheera in KGF Chapter 2 and it looked incredible. KGF: Chapter 2 is a sequel to KGF: Chapter 1 starring Yash that was loved by the audiences and which also bagged two National Film Awards this year, for its action and special effects. The sequel will now have Dutt play the role of the lead antagonist in the film. Sanjay Dutt As Adheera in KGF Chapter 2: Did You Know This Is Not Khalnayak Star’s First South Film? Watch VIdeo.

On Wednesday, September 25, Sanjay Dutt began shooting for the film in Hyderabad. Director Prashanth Neel took to Twitter to share first photos of Dutt joining the cast of the film and wrote, "Once a upon a time.. Adheera let's see how this epic story ends #kgfchapter2 shoot at Hyderabad With @duttsanjay sir commences.."

In the pictures, we see Dutt going bald again and this look certainly takes us back to his Agneepath stint where played the iconic baddie, Kanchacheena, except this time, he's seen sporting a beard.

.@duttsanjay joins the sets of #KGFChapter2. The highly anticipated project just got even bigger with the inclusion of Dutt jr. #KGF2 pic.twitter.com/iXZ6pYT8wG

In the sequel, Dutt plays Adheera, the brother of Suryavardhan played by Ramesh Indira in the first film. As per reports, KGF's breakout star, Yash will be joining Dutt in Hyderabad and the duo will soon be shooting for a few action scenes together. KGF Chapter 2: Sanjay Dutt’s First Look as Menacing ‘Adheera’ Is the Perfect Birthday Treat for His Fans.

KGF: Chapter 1 was a huge success at the box office and the buzz for the sequel is equally good. With Dutt on board as the antagonist, audiences are certainly looking forward to this film. In the meantime, Dutt was recently seen in Prassthanam which received a lukewarm response at the box office.

(The above story first appeared on LatestLY on Sep 25, 2019 04:38 PM IST. For more news and updates on politics, world, sports, entertainment and lifestyle, log on to our website latestly.com).