After Keerthy Suresh, Rashmika Mandanna to mark her debut in Bollywood? 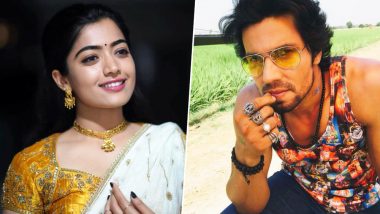 As Bollywood is gearing up to enter the South industry, the regional stars too are eyeing for a big career in B-town. After Keerthy Suresh announced her debut with Ajay Devgn's Syed Abdul Rehman biopic, seems like Rashmika Mandanna is also in talks to sign her first. As per new reports in Pinkvilla, this Dear Comrade actress is in talks to star in Sanjay Leela Bhansali's next with Randeep Hooda. If all goes well, this could be her big chance to enter Bollywood and who better than SLB to work with? Rashmika Mandanna Reacts to the Kissing Scene With Vijay Deverakonda in Dear Comrade – Watch Video.

As per sources close to the website, Rashmika is still reading the script and hasn't announced her decision yet. She is yet to sign on the dotted lines and her team is in frequent touch with the makers. While no major details about the project are out yet, we know Randeep plays a cop in this thriller. The movie is set in a small town and the storyline has a touch of comedy to it. Well, we certainly hope Rashmika is able to star alongside Randeep in Bhansali's next production venture and pray that her confirmation comes real soon. Kirik Party Actress Rashmika Mandanna Paired Opposite Karthi in Her First Tamil Film.

Coming to Bollywood, Alia Bhatt and Ajay Devgn are all set to feature in SS Rajamouli's next, RRR starring Jr NTR and Ram Charan. There are also reports about Shah Rukh Khan doing a cameo in Vijay's Thalapathy 63. With actors trying to break the regional walls, Indian cinema is expected to touch new heights in the next few years.

(The above story first appeared on LatestLY on Apr 25, 2019 10:57 AM IST. For more news and updates on politics, world, sports, entertainment and lifestyle, log on to our website latestly.com).