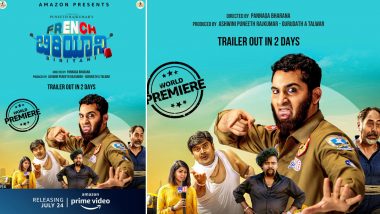 On May 15, it was confirmed that five south films are set to be released on Amazon Prime Video and one among them is the Kannada film titled French Biryani. Starring Sal Yusuf and Danish Sait in the lead, this film is all set to hit the streaming giant on July 24. But before that, here is another major treat for all those who were waiting to catch a glimpse of this upcoming Kannada flick. The makers have confirmed that the trailer of French Biryani would release in two days that is on July 16. 5 South Movies Confirmed to Premiere on Amazon Prime Video!

French Biryani is directed by Pannaga Bharana. Lead actors Sal Yusuf and Danish Sait would be seen playing the roles of a French expatriate and an auto driver, respectively. The comedy drama revolves around their three-day journey together. This film also features Disha Madan, Nagabhusan and Sindhu Srinivasamurthy in key roles. Owing to the coronavirus outbreak, many makers had to skip theatrical release and opt for a direct digital release of their films. Law Trailer: Rangini Chandran's Legal Drama Looks Like a Gripping Ride (Watch Video).

Talking about releasing films on OTT platforms, Pannaga Bharana told TNIE, “With so much new content, we are not able to hold on to the theatre screens for a longer period. The advantage of having the film on OTT is that it is always there. Anybody can come and watch it any time.” Besides south films, there are many other Bollywood and Hollywood movies that are also set to be released on OTT platforms.

(The above story first appeared on LatestLY on Jul 14, 2020 02:50 PM IST. For more news and updates on politics, world, sports, entertainment and lifestyle, log on to our website latestly.com).