Friendship: Harbhajan Singh is All Set for His Acting Debut, Shares the First Poster of His Tamil Film - View Pic

The poster of Friendship doesn't feature Singh on it but merely shows hands of two different men united by one handcuff. Check out the first poster of Harbhajan Singh's Tamil film Friendship. 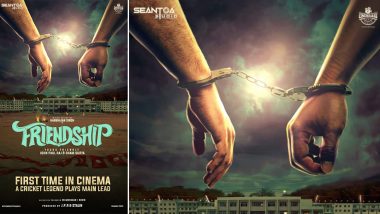 Cricketer Harbhajan Singh is all set to make his acting debut. Yes, you heard it right, the former Indian cricketer is all set to act in a Tamil film titled Friendship. The Indian spinner took to his social media to share the poster of the film and fans of the player can't contain their excitement hearing about it. The poster of Friendship doesn't feature Singh on it but merely shows hands of two different men united by one handcuff. In the backdrop, we see an empty ground which looks like it has witnessed some sort of a riot as we see bits of fire outbreaks in the surrounding. Harbhajan Singh Makes BCCI President Sourav Ganguly Dance to Bollywood Song 'Senorita' During Dadagiri Unlimited TV Show, Watch Video.

The makers of the film took to social media to announce the film. Sharing the first look poster, the tweet read, "For the first time in Indian cinema. Indian cricketer@harbhajan_singh will be the playing lead role in the upcoming #Friendship Movie. This "2020" is Will be Unexpected!!! And its going to Spin WorldWide. Stay excited with us for more updates". Harbhajan too shared the poster with a caption in Tamil.

For the first time in Indian cinema.Indian cricketer @harbhajan_singh will be the playing lead role in the upcoming #Friendship Movie.This "2020" is Will be Unexpected!!! And its going to Spin WorldWide.

Stay excited with us for more updates. pic.twitter.com/pfIortwGh7

This is certainly an exciting announcement and fans of the spinner immediately poured in warm wishes for him. A user wrote, “Best of luck Bhajji bhai!” The film has been helmed by John Paul Raj and Sham Surya. The poster also mentions ‘First time in cinema. A cricket legend plays main lead’. The film has been produced by JPR and Stalin and is set to hit theatres this summer. Well, let's hope we get to see Harbhajan's first look soon!

(The above story first appeared on LatestLY on Feb 02, 2020 08:01 PM IST. For more news and updates on politics, world, sports, entertainment and lifestyle, log on to our website latestly.com).