Earlier, in his Twitter statement, the maker had expressed that he had sleepless nights after the incident. 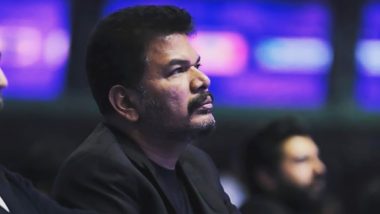 In a horrific incident on the sets Indian 2, three crew members died as a crane crashed on them, leaving 9 others injured. Lead stars Kamal Haasan, Kajal Aggarwal and director S Shankar were left unhurt. However, they are in deep shock after the accident. The director also recently gave a statement on Twitter expressing grief and shock. In the latest development on the situation, the filmmaker was summoned by the CBI for interrogation about the crane accident. Indian 2 Crane Accident: Kamal Haasan Announces Rs 1 Crore Financial Help to the Families of the Unit Members who Died in the Mishap.

As per the reports, a 2-hour-long session happened where the director was grilled by CBI. There are no details divulged about the nature of questions that were asked by them as of now. The quizzing happened in Vepery, Chennai.

Earlier, in his Twitter statement, the maker had expressed that he had sleepless nights after the incident. "It is with utmost grief, I’m tweeting. Since the tragic incident, I’ve been in a state of shock & having sleepless nights on the loss of my AD & crew. Having missed the crane by a whisker,I feel it would’ve been better if it was on me. Heartfelt condolences & prayers to the families," he wrote.

On the other hand, Lyca Productions that presents the film blamed the director and the lead actor for negligence on the sets. This came as a response to the letter posted by Kamal Haasan questioning the production house regarding the safety measures on the sets. The crane operator was arrested after he fled away from the accident scene. Assistant director Krishna, art assistant, Chandran and production assistant Madhu lost their lives in this terrible mishap.

(The above story first appeared on LatestLY on Feb 28, 2020 09:03 AM IST. For more news and updates on politics, world, sports, entertainment and lifestyle, log on to our website latestly.com).