Indian 2 Crane Accident: Kamal Haasan Announces Rs 1 Crore Financial Help to the Families of the Unit Members who Died in the Mishap

Kamal Haasan had earlier offered his condolences with Kajal Aggarwal for the victims of the Indian 2 crane accident. 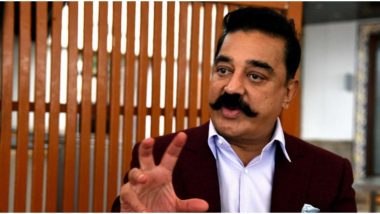 The sad news about three unit members of Kamal Haasan's Indian 2 passing away due to a crane accident on the film's set has saddened one and all. Three people named Sai Krishna, Chandran and Madhu from the unit of the Shankar's next died while nine others were seriously injured when a crane fell on them while constructing the sets on February 19. While the film's lead actors, Kamal Haasan, Kajal Aggarwal and others have already offered their condolences, the Chachi 420 actor has now decided to lend them a hand monetarily.

As per industry tracker, Ramesh Bala, Kamal Haasan has announced Rs 1 crore financial help to the families of the three-unit members who lost their lives in the mishap. It's truly commendable on the actor's part to reach out to these families in such hard times. Fans of the actors and industry people have already reacted to the accident and are severely shocked by the news. It's high time authorities start making some protocols for the safety of the film's crew. Accident on Indian 2 Sets: Lead Actress Kajal Aggarwal Offers Deepest Condolences To The Families of the Deceased Crew Members.

#BREAKING : Actor @ikamalhaasan has announced that the families of the three #Indian2 unit member who died in the tragic incident last night, will receive ₹ 1 Cr financial help..

"Though (I) have met with and crossed many accidents, today's mishap is very horrific. I have lost three of my colleagues," Haasan said in a tweet. "More than my pain, the grief of the family who lost them will be manifold. I take part in their grief as one of them," he added further. Hopefully, the authorities will take necessary steps to ensure such accidents don't happen again.

(The above story first appeared on LatestLY on Feb 20, 2020 05:00 PM IST. For more news and updates on politics, world, sports, entertainment and lifestyle, log on to our website latestly.com).