KGF Chapter 2 First Look: A Suave Looking Yash and his 'Army of People' Look Determined to Build a New Empire

Yash's dapper avatar and his army of people are determined to build a new empire but before claiming his throne, he'll have to face Sanjay Dutt's Adheera. 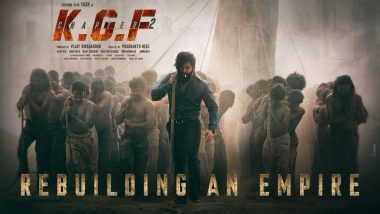 Brace yourself for Yash's first look from KGF Chapter 2 is out and it's super impressive. A dapper looking Yash is eager and determined to rebuild his empire and we can't wait to see him bring alive his dashing persona on-screen. KGF Chapter 1 was released in 2018 and it was a commercial hit with its Hindi version performing as well as its original. The reason behind unveiling the sequel's first look today was to celebrate part one's anniversary. Chapter one released on December 21, 2018, and to make its first anniversary more special, the makers decided to surprise fans by unveiling the actor's first look from chapter 2. KGF Box Office Collection: Yash's Film Surpasses Rs 100 Crore Mark Worldwide.

Yash will be joined by Sanjay Dutt, who plays the main antagonist, Adheera in the movie's new sequel. Speaking about his character, Sanjay in one of his earlier interactions said, "Adheera's character is very powerful. If you have seen Avengers, you would know Thanos. So Adheera is like him. He is a very dangerous character with a dangerous get-up. And that's the zone I was looking for."

The story revolves around Rocky and his quest for power and wealth. He comes to Mumbai to fight his poverty and soon gets involved with the gold mafia. The second chapter will see Rocky locking horns with Adheera and their tussle will be worth waiting for. The movie is slated to release in July 2020.

(The above story first appeared on LatestLY on Dec 21, 2019 06:53 PM IST. For more news and updates on politics, world, sports, entertainment and lifestyle, log on to our website latestly.com).