Meri Awaz Suno: Shiboprosad Mukherjee Is Happy About His Bengali Film ‘Konttho’ Which Now Gets a Malayalam Remake 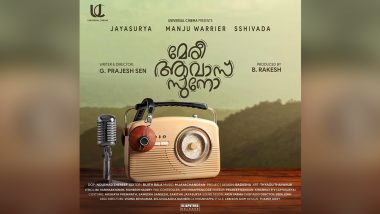 Well known Malayalam stars Manju Warrier and Jayasurya will be starring in the remake of the Bengali hit 2019 film Konttho. Actor Shiboprosad Mukherjee, who played lead in the original is happy with the story crossing borders. The Malayalam remake will be titled Meri Awaz Suno. Aditi Rao Hydari: OTT Platforms Became Our Best Friends During COVID-19 Lockdown.

The Bengali blockbuster starred Shiboprosad Mukherjee and Nandita Roy in the lead roles. Shiboprosad tells IANS, "It is gratifying to see our content resonating with the audience beyond the geographical boundaries and breaking the barriers of language. Seetimaarr Teaser: Gopichand Makes Mass Entry As A Kabaddi Coach; Tamannaah Bhatia Makes A Blink And Miss Appearance (Watch Video).

Konttho is extremely close to our hearts as the story is so emotionally binding and impactful, we are glad that the film has successfully created a mark and is now set to reach even a wider audience."

The poster of the upcoming film released on 13th February by Manju Warrior and Jayasurya. The Malayalam remake is written and directed by G Prajesh Sen and produced by B Rakesh.

(The above story first appeared on LatestLY on Feb 22, 2021 06:34 PM IST. For more news and updates on politics, world, sports, entertainment and lifestyle, log on to our website latestly.com).