Directed by Sampath Nandi, Seetimaarr is bankrolled by Chitturi Srinivas Rao under the banner of Srinivasaa Silver Screen. The upcoming sports drama features Gopichand and Tamannaah Bhatia in the lead. 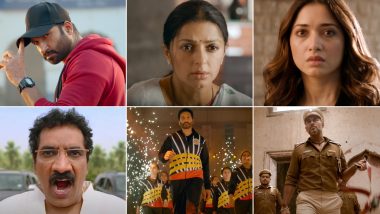 Fans of Gopichand have been eagerly waiting to watch the actor back on the big screens and the wait will come to an end with the upcoming sports drama, Seetimaarr. He was last seen in the film Chanakya that had released in 2019, in which he played the role of a spy. Movie buffs are thrilled and waiting to watch him on the big screen as a kabaddi coach. The makers of Seetimaarr have released the film’s teaser and one will be stunned to watch Gopichand as Karti, a rough and tough kabaddi coach of an all-girls team. Digangana Suryavanshi Talks About Working With Gopichand In Seetimaarr And Acting From A Young Age [LatestLY Exclusive].

Both Gopichand and Tamannaah Bhatia would be seen as kabaddi coaches to an all-girls team. While Gopichand is seen making a mass entry, Tamannaah as Jwala Reddy, makes a blink and miss appearance. The actress has reportedly undergone a complete a transformation for the film, but we hardly get to see anything of this female kabaddi coach in this teaser. Talking about her role Tamannaah had earlier stated, “I feel that coaching is an underrated aspect of any professional sport and that is why I find this film even more interesting,” reports TOI. Seetimaarr: Tamannaah Bhatia Perfects The Stance Of A No-Nonsense Kabaddi Coach In This New Poster Released On Her Birthday.

Directed by Sampath Nandi, the upcoming Telugu film is bankrolled by Chitturi Srinivas Rao under the banner of Srinivasaa Silver Screen. It will hit the big screens on April 2.

(The above story first appeared on LatestLY on Feb 22, 2021 12:09 PM IST. For more news and updates on politics, world, sports, entertainment and lifestyle, log on to our website latestly.com).