Most Eligible Bachelor, starring Akhil Akkineni in the lead, is directed by Bommarillu Bhaskar. It is presented by Allu Aravind under the banner GA2 Pictures and is produced by Bunny Vas-Vasu Varma. 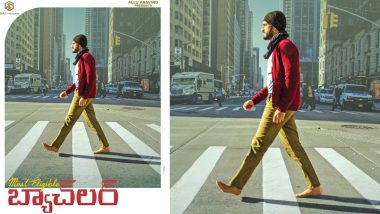 It was by the end of May 2019 when #Akhil4, as this upcoming flick was tentatively titled, went on floors. The long wait to know more details about this film has come to an end. The film starring Akhil Akkineni in the lead has been titled Most Eligible Bachelor, of which the announcement was made in the first week of February 2020. In fact, the makers have also released the first look of the lead hero and he looks impressive. While sharing the first look, Akhil captioned it as, “Here goes the first of the seven steps of #MostEligibleBachelor. See you at the theatres this April.” #Akhil4 Goes on Floors, Akhil Akkineni Starrer to Be Helmed by Bommarillu Bhaskar – See Pics.

Akhil, Hello and Mr Majnu were the first three films in which he played the lead. In this Most Eligible Bachelor poster, Akhil Akkineni, who is dressed up in a casual, warm outfit, is seen walking on a zebra crossing. The handsome hunk is walking through the New York street and that too bare feet. Well, why is this ‘eligible bachelor’ walking in such a way, we’ll get to know that soon. If you haven’t seen the pic yet, take a look at it now. These Pics of Nagarjuna Akkineni With Rakul Preet, Samantha Akkineni and Others From the Sets of Manmadhudu 2 Are Unmissable!

(The above story first appeared on LatestLY on Feb 10, 2020 09:11 AM IST. For more news and updates on politics, world, sports, entertainment and lifestyle, log on to our website latestly.com).