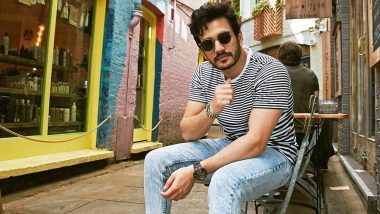 Akhil Akkineni is the son of Telugu actors Akkineni Nagarjuna and Amala Akkineni. The actor made his debut with the film Akhil that released in 2015, a V. V. Vinayak directorial. The actor is now all set to feature in his fourth film that is tentatively titled #Akhil4. The movie directed by Bommarillu Bhaskar has gone on floors today. Pictures from the launch ceremony has hit the internet and fans are curious to know which actress would be paired opposite Akhil. These Pics of Nagarjuna Akkineni With Rakul Preet, Samantha Akkineni and Others From the Sets of Manmadhudu 2 Are Unmissable!

For the film’s launch ceremony veteran actors Akkineni Nagarjuna and Amala Akkineni were present. The film is produced by Bunny Vas-Vasu Varma and presented by Allu Aravind under the banner GA2 Pictures (Geetha Arts). Ace musician Gopi Sundar has been roped in to compose the film’s music. Has Dear Comrade Actress Rashmika Mandanna Been Roped In Vijay’s Thalapthy 64?

Talking about the genre, there were reports stating that #Akhil4 would be a romantic entertainer. It was also touted that Bollywood actress Kiara Advani and popular south actress Rashmika Mandanna are being considered for the role. However, the makers are yet to finalize who will be roped in as the lead actress. The team will soon start with the first schedule of #Akhil4. This upcoming flick is Bommarillu Bhaskar’s sixth film and it is after four years he’s getting back to the director’s chair. Stay tuned for further updates.

(The above story first appeared on LatestLY on May 24, 2019 02:04 PM IST. For more news and updates on politics, world, sports, entertainment and lifestyle, log on to our website latestly.com).