On Mohanlal's 60th Birthday, Let’s Revisit The Malayalam Superstar’s 7 Evergreen Dialogues That Are Impossible To Forget!

Mohanlal’s films have always been loved by the movie buffs, but what has caught everyone’s attention are his iconic dialogues. Some of his dialogues are also used by many during a normal conversation and these evergreen dialogues of the superstar are impossible to forget. 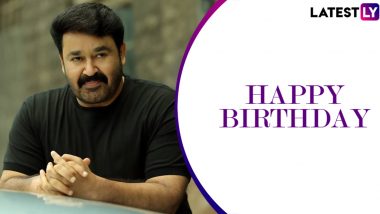 Mohanlal, the charming and one of the most loved actors across the globe, has turned 60 on May 21. Happy Birthday, Laletta! That’s how he is fondly called by his fans. The superstar who has had a career spanning more than forty years, has enthralled the audience by playing a varied range of roles. Be it a supporting role, boy-next-door, romantic, comedy, antagonist, you name it and you’ll see that Mohanlal has never ever shied away from taking up any kind of roles. Whenever he has made an appearance on the big screens, all you could hear is cheering and whistles. Drishyam 2 Confirmed Ahead Of Superstar Mohanlal’s 60th Birthday!

Mohanlal, who acted in more than 340 films, established himself as a bankable actors in the mid-1980s. It is his efforts that has made him today one of the most successful stars. Besides Malayalam, the superstar has also shown his acting prowess in other industries too and that includes Tamil, Hindi, Kannada and Telugu. Mohanlal’s films have always been loved by the movie buffs, but what has caught everyone’s attention are his iconic dialogues. Some of his dialogues are also used by many during a normal conversation, it could be at home, workplace or any gathering. These evergreen dialogues of the superstar are impossible to forget. Be it for a friendly talk or an intense situation or something cheezy, for every situation Mohanlal has given movie buffs some amazing dialogues. On the occasion of Mohanlal’s 60th birthday, let’s revisit those iconic dialogues of the Malayalam superstar. Mohanlal Birthday Special: 5 Cameos of the Malayalam Superstar That Show Lalettan’s Brilliance Even in Small Doses.

“Narcotics Is A Dirty Business”

This is an iconic dialogue from Mohanlal’s 1987 crime-thriller Irupatham Noottandu. This mass dialogue was again used by the actor in his 2019 film Lucifer.

This is another punch dialogue of Mohanlal from the film Ravanaprabhu, which also marked the directorial debut of Ranjith. This movie is a sequel to the 1993 film Devasuram written by Ranjith.

This dialogue of Mohanlal is often repeated by many in real as well. This evergreen dialogue of his from the film Narasimham instantly became of part of daily conversation.

Dialogue delivery is of utmost importance and Mohanlal is just perfect at it. This particular three word dialogue which means ‘Do You Have It (The Item) With You?’ from Akkare Akkare Akkare had turned out to be a huge hit.

“I Am The Answer…Kilometres and Kilometres”

Mohanlal and Sreenivasan have been everyone’s favourite and whenever they have been featured together in a movie, they have given us some memorable moments. Mazha Peyyunnu Maddalam Kottunnu was one such film. When Sreenivasan asks Mohanlal (who is not fluent in speaking English), “How many kilometres from Washington DC to Miami Beach?” and the latter’s response to it, “I Am The Answer…Kilometres and Kilometres”, it left everyone in splits. So today if you ask a Malayali about a particular distance, you might end up hearing that dialogue.

This dialogue from the movie Kilukkam is implemented when someone acts crazy. So it’s like asking him/her, “You Are Crazy, Right?”

If you want to apologise to your Malayali pal try saying “Lelu Allu Lelu Allu Lelu Allu”, the person will not just get where it is coming from, but will also burst into laughter. This is the epic scene from the movie Thenmavin Kombath is such that one won’t ever forget.

No one other than Mohanlal could have made these dialogues sound so good and relatable. These can indeed be implemented in your day-to-day conversation. We are waiting to hear more such epic dialogues from the superstar in his future projects. Happy Birthday, Laletta!

(The above story first appeared on LatestLY on May 21, 2020 12:01 AM IST. For more news and updates on politics, world, sports, entertainment and lifestyle, log on to our website latestly.com).