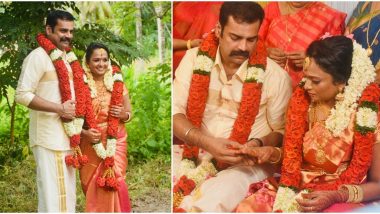 Pradeep Chandran, who is widely known for his stint the controversial reality TV show, Bigg Boss Malayalam 2, has tied the knot with Anupama Ramachandran. According to leading media reports, the wedding took place at the latter’s house at Karunagappalli on July 12. It was an intimate affair for which family members were seen in attendance. The wedding ceremony took place as per the traditional Hindu rites. Kannada Actress Mayuri Kyatari Ties the Knot with Longtime Beau Arun (Watch Wedding Ceremony Video).

Besides being a contestant on the second season of Bigg Boss Malayalam, Pradeep Chandran is also widely known for his role in the television serial Karuthamuthu. He played the lead character Abhiram in this Malayalam serial. The actor has shared a few pictures from his wedding day on Instagram. If you haven’t seen them yet, take a look at it right away! Tollywood Producer Dil Raju Ties The Knot Amid Coronavirus Lockdown, Wedding Pics Go Viral.

There were many family members of Pradeep Chandran who could not make it to his wedding owing to the lockdown restrictions in the wake of coronavirus outbreak. A live video of the wedding ceremony was shared from his account and through it, his pals and other family members could be a part of his special day. The actor had initially planned for a grand wedding ceremony in Thiruvananthapuram, but had to change it all owing to the ongoing crisis.

(The above story first appeared on LatestLY on Jul 15, 2020 02:47 PM IST. For more news and updates on politics, world, sports, entertainment and lifestyle, log on to our website latestly.com).