Pragya Jaiswal Feels Nandamuri Balakrishna’s Passion for Cinema Is Unmatchable, Says ‘He Is a Powerhouse of Energy and Positivity on the Sets’

Pragya Jaiswal is currently busy shooting for her upcoming film alongside Telugu star Nandamuri Balakrishna. The film is tentatively titled #BB3 and is directed by Boyapati Srinu. The actress calls shooting for #BB3 a special experience. 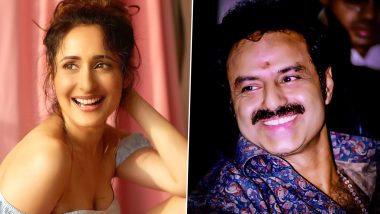 Actress Pragya Jaiswal is currently busy shooting for her upcoming film alongside Telugu star Nandamuri Balakrishna. The film is tentatively titled #BB3 and is directed by Boyapati Srinu. Pragya says Balakrishna's passion for cinema is unmatchable. "Working with Balakrishna sir is fantastic because he is a powerhouse of energy and brings so much positivity and energy on the sets. His passion for cinema is unmatchable," Pragya tells IANS. When Pragya Jaiswal Twirled, Smiled and Had That Gorgeous Suit On!

Srinu has directed Pragya in Jaya Janaki Nayak (2017) and Balakrishna in Simha (2010) and Legend (2014). Talking about being directed by the filmmaker, she says: "I have worked with Boyapati sir before, so that made it a bit easy to work on BB3. His vision, conviction and clarity is inspiring. He is the driving force of the entire unit and makes us all do our best each day and keep pushing our limits." Antim: Salman Khan to Romance South Actress Pragya Jaiswal in the Action-Thriller?

The actress calls shooting for #BB3 a special experience. "The film is even more special because it is the first film I started shooting post the pandemic, so it seems like it is a fresh start," says Pragya. The actress, who is currently shooting in Hyderabad, adds: "I'm happy to be back to work after months of lockdown. I was so looking forward to resuming work in 2020 and now I am on the set of two films. (I am) Just happy to be living my dream."

(The above story first appeared on LatestLY on Mar 17, 2021 09:52 AM IST. For more news and updates on politics, world, sports, entertainment and lifestyle, log on to our website latestly.com).