Salman Khan character is said to be very important for the narrative of the film. Fans will get to see him in a new avatar which is more real, intense and raw. Antim is an official remake of the Marathi film Mulshi Pattern. 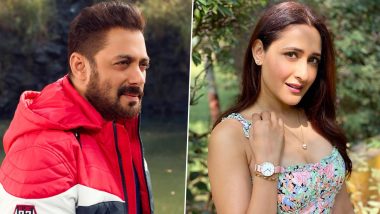 Antim starring Salman Khan and Aayush Sharma is making all the right kind of noises. The cast is currently shooting for the film currently and often is in the news for its updates. Salman too makes sure that he keeps the fans excited about the film and shares snippets from the sets of the film from time to time. But while people are excited to see Salman and Aayush on the screen, many wondered about Salman's leading lady in the film. No announcement about the female lead has been made and fans are now wondering if Salman will have or not have a love interest this time in Antim. Antim: A Turban-Clad Salman Khan Makes a Grand Entry on the Sets of Aayush Sharma’s Film.

Let us tell you that Salman will indeed romance a beautiful actress in the action thriller. The details about her have been kept under wraps however a source close to the development told Pinkvilla that south actress Pragya Jaiswal will be paired against the superstar. The source informed that Salman and Pragya shot for their scene together a few days back and she was present at the sets when the team was shooting in Mahabaleshwar as well.

The source said, "She has been shooting silently for the last few days with the entire team of Antim and was also a part of the Mahabaleshwar schedule. She plays’ Salman’s lady love and the two will also have a romantic song in the film. The shoot is going on in full swing, and the team is looking to wrap up the film by mid-February and get it ready for a release in the second half of 2021.” Well, if this happens to be true, the fans will be excited to see Salman with a new female lead. Antim: Here’s Why Aayush Sharma Expresses His Gratitude Towards Salman Khan!

Earlier, a source gave an update about the film's shoot and revealed, "Mahesh Manjrekar is currently working towards amplifying the fight between good and bad." Salman Khan character is said to be very important for the narrative of the film. Fans will get to see him in a new avatar which is more real, intense and raw. Antim is an official remake of the Marathi film Mulshi Pattern. The film will be directed by Mahesh Manjrekar and also stars Mahima Makwana in a pivotal role.

(The above story first appeared on LatestLY on Jan 23, 2021 08:28 PM IST. For more news and updates on politics, world, sports, entertainment and lifestyle, log on to our website latestly.com).