Rajinikanth was supposed to launch political party in January next year, ahead of the Tamil Nadu Assembly Elections. 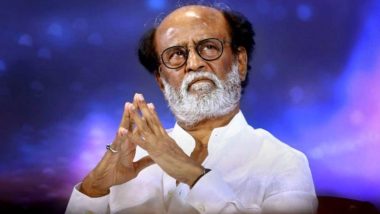 Superstar Rajinikanth was all set to make his political debut in January 2021. But now he has issued a three-page statement citing that he will not be making his political debut owing to his health condition. The superstar who had promised his fans about his foray into politics has issued an apology in his statement for now not launching the party. 'Now or Never': Rajinikanth's 70th Birthday Cake Is a Nod to His Political Party.

Rajinikanth was hospitalised after his blood pressure fluctuated. In the statement issued the actor has mentioned that the doctors have advised him that the blood pressure fluctuation would affect his transplanted kidney. Rajinikanth was discharged from hospital on December 27 and returned to his Chennai residence. This major announcement has come right after it. He said, “With extreme sadness I say that I can’t enter politics.” He also mentioned, “This decision of mine will disappoint my fans and people but please forgive me.” Rajinikanth Clarifies the Viral Letter Hinting his Exit from Politics Isn't His But the Information About his Health is True.

Rajinikanth was supposed to launch political party in January next year, ahead of the Tamil Nadu assembly elections. In the statement the actor mentioned that he will serve people without entering electoral politics. He stated, “Only I know the pain of announcing this decision.”

(The above story first appeared on LatestLY on Dec 29, 2020 12:22 PM IST. For more news and updates on politics, world, sports, entertainment and lifestyle, log on to our website latestly.com).