The veteran actor in his new Twitter post has refuted any possibility of his association with the viral letter but insists that the health information in the same is true. 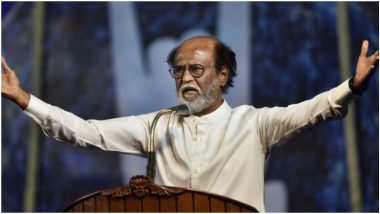 For the ones who were wondering about the authenticity of the letter that suggests Rajinikanth is rethinking about his political career, here comes an official confirmation from the horse's mouth. The veteran actor in his new Twitter post has refuted any possibility of his association with the viral letter but insists that the health information in the same is true. If so, this would be the first time that he has confirmed his renal transplant surgery at Mayo Clinic, Rochester in 2016. Rajinikanth Rules Himself Out of Race For Tamil Nadu CM, Says 'Never Thought of Chief Minister's Post, But Want Change in Politics.

According to the viral letter, the reason why Rajinikanth was having doubt about his political career was the ongoing pandemic and his kidney transplant surgery. His doctors had apparently suggested that being a kidney transplant patient, his movement outdoors could be severely restricted even after the arrival of a vaccine and that could prove as a hurdle in his political career. Into the Wild With Bear Grylls and Rajinikanth: 5 Moments From Discovery's Special Episode Jotted Down For Every Thalaiva Fan!

Check Out the Tweets

#BREAKING : #Superstar @rajinikanth says the medical information about his health in the statement is true..

If so, it is for the first time, he has indirectly confirmed that he underwent kidney transplant surgery in #Mayo Clinic in #Rochester Minnesota in May of 2016..

The letter that was circulated amongst Rajinikanth's close aides was leaked online and it also suggested how the actor is keen about his political dreams. “I don’t worry much about myself; not as much as about those who are around me," read a part of his statement in the letter. While the decision to exit politics hasn't been taken yet, we hope the actor and his team think about a way of sorting this out.

(The above story first appeared on LatestLY on Oct 29, 2020 02:46 PM IST. For more news and updates on politics, world, sports, entertainment and lifestyle, log on to our website latestly.com).