Ram Charan has finally made his debut on Twitter, and his fans just cannot contain happiness. The superstar of Telugu cinema has joined the micro-blogging site right after a day his father, Megastar Chiranjeevi, joined Twitter. 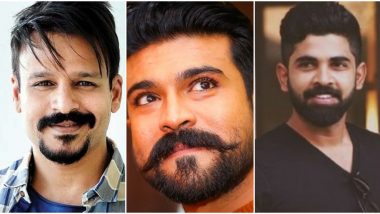 Ram Charan has finally made his debut on Twitter, and his fans just cannot contain happiness. The superstar of Telugu cinema has joined the micro-blogging site right after a day his father, Megastar Chiranjeevi, joined Twitter. The excitement is even more amongst the RC (as Ram Charan is fondly called) fans, as tomorrow, March 27, he would be celebrating his birthday. The minute Ram Charan joined Twitter, fans have been pouring tons of love for him and also welcoming him with various messages and pictures. But what has impressed them the most is his first tweet. And it is not just fans, even Bollywood actor Vivek Oberoi, SS Rajamouli’s son Karthikeya, and many others have welcomed RC on Twitter and praised his first tweet. After Father, Megastar Chiranjeevi, Son Ram Charan Joins Twitter, a Day Before His Birthday!

Ram Charan’s first tweet was not about his excitement on joining Twitter, but it was regarding the contribution he wants to make for combating the coronavirus. Like many other celebs, even Ram Charan decided to donate Rs 70 lakh towards the Centre and States of Andhra Pradesh and Telangana Relief Fund. This tweet from the Tollywood hero has left many impressed. Vivek Oberoi mentioned in his tweet, “What an amazing way to enter! Kudos to your gesture! Chala Bagundi”. SS Karthikeya wrote, “A great way to enter! Inspiring!” Chiranjeevi Makes His Twitter Debut on the Occasion of Ugadi.

Hope this tweet finds you in good health. At this hour of crisis, inspired by @PawanKalyan garu, I want to do my bit by contributing to aid the laudable efforts of our governments...

Hope you all are staying safe at home! @TelanganaCMO @AndhraPradeshCM @PMOIndia @KTRTRS pic.twitter.com/Axnx79gTnI

Big welcome to the world of Twitter my brother @AlwaysRamCharan! We have all awaited u for way too long! What an amazing way to enter! Kudos to your gesture! Chala Bagundi🙏

A grand welcome to the crazy world of Twitter to our Ramaraju aka @AlwaysRamCharan! Here you are finally. This is going to be fun! 😀 #RamCharanOnTwitter

Love And Support From The Wifey - Upasana Konidela

This is so inspiring 🙏🏼I know how hard everyone is working behind the scenes to keep us safe. Jai Hind @AlwaysRamCharan @narendramodi @ysjagan @PawanKalyan @KTRTRS https://t.co/0UynxF49Xs pic.twitter.com/b2V18eurTF

Here’s What Fans Have To Say

Mega Family is trying to entertain audiences even in this tough time.😘😘😘😍😍😍😍#RamCharanOnTwitter

Fans Call It As The Royal Debut On Twitter

Mega Powerstar @AlwaysRamCharan stole our hearts with the first tweet, contributing ₹70Lakhs to governments of Telugu states to fight against #Corona.

Now we wonder, on the occasion of his birthday, which is tomorrow, what surprise would he be throwing for his fans! Will Ram Charan share his first look from the upcoming magnum opus, RRR? Stay tuned for further updates from the world of entertainment.

(The above story first appeared on LatestLY on Mar 26, 2020 02:35 PM IST. For more news and updates on politics, world, sports, entertainment and lifestyle, log on to our website latestly.com).